If inspections go well in the following days, the Washington State Liquor Control board plans to issue the first retail licenses to legal pot shops on July 7. That means July 8 could be the historic opening day in the Evergreen State. The problem is that only about 20 retail shops are expected to get licenses—and they may even have trouble getting their hands on bud to sell.

“Supply is going to be tight,” says Brian Smith, communications director for the Washington State Liquor Control Board, the body overseeing the implementation of the world’s second legal weed market. Thorough inspections have slowed the issuing of licenses to growers, processors and retail shops that make up the supply chain servicing pot-seekers. The state has issued 79 licenses to producers and processors, according to data released June 24. More than 2,000 applications remain pending. “The reality is that when we’re working with applicants, a lot of people aren’t ready to be licensed,” Smith says, noting that businesses may not have set up sufficient security or even finished building their locations.

The result of the supply shortage could be hiked prices—on top of already heavily taxed marijuana—long lines or limits on amounts consumers can buy. Smith says officials from Seattle have called the Board, seeking information about how they might best ensure public safety next week. Colorado faced similar worries ahead of its retail opening on Jan. 1 this year, a date locals dubbed Black Wednesday. In both states, officials have walked a tightrope as they make rules for the new market—trying to keep supply sufficient but also low enough that weed doesn’t spill across borders into states where it remains a controlled substance.

Washington has long known this shortage could be coming. “We’ve always been worried about supply and demand,” Smith told TIME in December, discussing the Board’s decisions about where to cap the number of licenses. “You base it on the best data you have available.”

And given that Colorado and Washington are charting new territory, that data is not in great supply yet either. 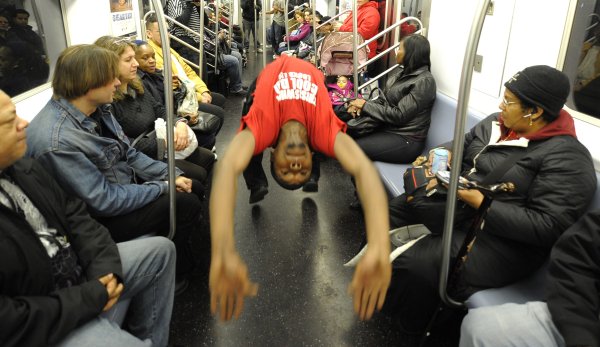 Showtime Over as NYPD Cracks Down on Subway Acrobats
Next Up: Editor's Pick