US fans cheer before the start of the FIFA World Cup Round of 16 match between the USA and Belgium played at the Arena Fonte Nova in Salvador, Brazil, at Soldier Field in Chicago, on July 1, 2014.
Tannen Maury—EPA
By Laura Stampler

The United States Men’s National Team will play Belgium in round 16 of the World Cup Tuesday afternoon. It’s a pretty big deal, and people are appropriately excited. (See official pump up video for the game above in case you need help on that front).

Considering a lot of newbies will be tuning in, here’s a guide to everything you need to know about the big game:

What time is it? USA and Belgium will start at 4 p.m. EST

How long does it last? Games are 90 minutes long, with a halftime that must not exceed 15 minutes. There’s also some extra time added to each 45-minute half to account for various stoppages, like injuries. If the game’s tied after 90 minutes plus stoppage time, USA and Belgium will play for another 30 minutes, divided into two 15-minute halves (plus yet even more stoppage time!).

If the teams are still tied after that, the game gets decided on penalty kicks, as the Brazil-Chile match was.

How does a team win? Scoring in tournament soccer can be confusing. Some were confused that the United States won and moved on to the 16th round after a 0-1 loss to Germany, for example. But this round of the World Cup is simpler: The team with the most points at the end of the game wins and moves on to play the winner of today’s Argentina-Switzerland match. The losing side goes home empty-handed.

How do I watch? Viewers can tune in on ESPN and Univision. If you’re stuck TV-less at the office, there are livestream options at ESPN.com for people who have cable log-in information. You can also follow ESPN’s Gamecast (a live blog with updated illustrations) or ESPN Radio’s broadcast. Univision will provide free streaming video in Spanish.

Who is favored to win? Belgium. But according to the Los Angeles Times, that might not be a bad thing for the U.S. since “this World Cup hasn’t been kind to favorites.” Example: Spain was the world’s top ranked team and went home during the group portion of the tournament. (And then the team’s flight home was struck by lightning). 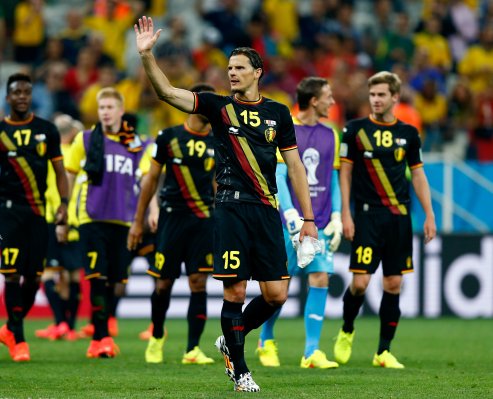 Belgium a Dynamic Test for USA Amid High Expectations, Golden Generation
Next Up: Editor's Pick