Sister Caroline attends a rally with other supporters of religious freedom to praise the Supreme Court's decision in the Hobby Lobby, contraception coverage requirement case on June 30, 2014 in Chicago, Illinois.
Scott Olson—Getty Images

The Hobby Lobby victory in the United States Supreme Court Monday has broad implications for religious liberty, many of them I’ve discussed elsewhere. But one aspect some might miss is that in this case the Court upheld the principle of separation of church and state.

In his majority opinion, Justice Samuel Alito addressed the question of whether the Green family (owners of Hobby Lobby) and the Hahn family (owners of Conestoga Wood Specialties) have a reasonable case to believe that paying for the drugs and devices at issue would be immoral. He noted that the families believe that paying for these things would mean potentially empowering the destruction of a fertilized embryo and would thus be immoral. He then noted that the question here is one the courts, in his words, “have no business addressing.

“This belief implicates a difficult and important question of religion and moral philosophy, namely, the circumstances under which it is wrong for a person to perform an act that is innocent in itself but that has the effect of enabling or facilitating the commission of an immoral act by another,” he writes. “Arrogating the authority to a binding national answer to this religious and philosophical question, HHS and the principal dissent in effect tell the plaintiffs that their beliefs are flawed. For good reason, we have repeatedly refused to take such a step.”

In the case syllabus, the majority points to the moral and theological questions involved and writes: “It is not for the Court to say that the religious beliefs of the plaintiffs are mistaken or unreasonable.”

I say “Amen” to that. There are many reasons why this decision will be good for all Americans, including those who disagree strongly with it now, but one reason is found in the court’s refusal to play theological referee.

“Separation of church and state” is a fairly partisan phrase these days, since it has come to be equated with the “naked public square” of secularization. Many, quite wrongly, use the phrase to suggest that believers ought to place their religious convictions in a blind trust when they leave their churches or synagogues or mosques to go out into the marketplace or the voting booth.

But the phrase didn’t start with the secularizers. It’s a principle held by very orthodox believers, especially in the Baptist tradition, who wanted the government out of dictating doctrine. The early Baptists and their allies understood that a government in the business of running the church, or claiming the church as a mascot of the state, invariably persecutes and drives out genuine religion.

The American Civil Liberties Union didn’t invent the separation of church and state. Jesus did, when he said that we should render unto Caesar that which is Caesar’s and render unto God that which is God’s (Matt. 22:21). And many who use the phrase “church/state separation” actually believe in just the opposite—a church dominated by the state and a state empowered to tell believers what they ought to believe and why.

The Left often demonizes those with strongly held religious convictions as, by definition, theocrats who want to take over the government. This is hardly the case. Hobby Lobby didn’t start this skirmish with the government. The families involved have no interest in what sorts of contraceptive plans are in other companies’ benefits packages.

They want simply the freedom not to be compelled to submit to the government’s morality lesson. Moreover, they want the freedom for the government not to tell them, theologically, what they ought to care about when they stand before the judgment seat of Christ.

As they did earlier in the Greece v. Galloway prayer case, the Court has declared its competence to decide constitutional law but its incompetence to try to, as we Christians would put it, rightly divide the Word of Truth. That’s good news, and good news for everybody.

In the meantime, it ought to prompt those of us on the more conservative and religious side of the spectrum to reclaim the name for what we’ve always believed: the separation of church and state. It’s a good old phrase that’s been highjacked by the Left for long enough.

Dr. Russell Moore is president of the Ethics & Religious Liberty Commission of the Southern Baptist Convention. 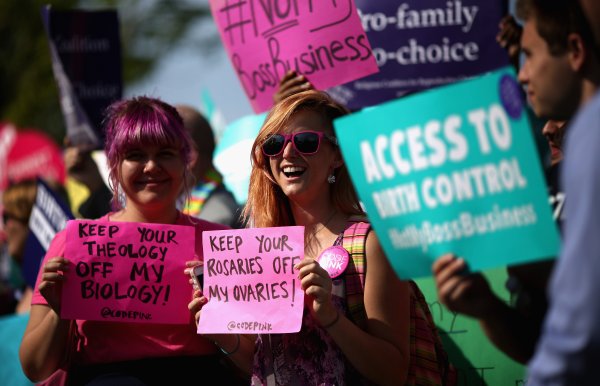 The Supreme Court Ruled in Favor of Patriarchy, Not Democracy
Next Up: Editor's Pick