What is the Caliphate?

Most Westerners have only the dimmest idea of what the Islamic State of Iraq and Greater Syria (ISIS) claims to have set up on the desert flats and cities it controls.

Just what is the Caliphate?

At its most basic, the Caliphate is how Muslims organized themselves for centuries after the death of the Prophet Mohammed. In life, Mohammed led the faith that Muslims believe he channeled directly from God, serving as both religious leader and temporal ruler of the legions drawn to his teachings.

But when the Prophet died in 632 A.D., he left no heir, and the search was on for a successor—which is what caliph means. The caliphate (or succession) is what he rules, the governing body that claims dominion over all believers.

The competition for caliph would split the faith. After Mohammed died, some thought his favorite son-in-law, Ali, should serve. A supporter of Ali was rendered as Shiaat Ali, which became “Shia.”

Others said the caliph should be drawn from those who were especially close to the Prophet, and followed his teachings and example, or Sunnah. They formed Islam’s Sunni tradition.

Shiites stopped selecting caliphs fairly early on, but in the dominant Sunni tradition, the office held ultimate religious and political authority. The combined powers held together empires based wherever the Caliph chose: Baghdad, Damascus or, finally, Istanbul, from which Ottoman sultans governed an empire stretching across three continents for more than 500 years.

But the Ottoman Empire collapsed in World War I, and its remaining land was divided up into the form preferred by the European victors: nation-states. And as it happened, perhaps the most emphatic nation-state in the world, the Republic of Turkey, emerged on its own in the Anatolian peninsula that had been the heart of the empire. Its founder, Mustafa Kemal Ataturk, viewed Islam as a rival to the power of the secular state, and literally packed the last caliph out of town on the Orient Express—Abdulmecid Efendi, an urbane scholar who by some accounts was reading the essays of Montaigne when the police came for him. He retired to Paris and Nice.

Decades passed, and the West largely forgot that there ever was a caliphate. But Muslims did not. The Muslim Brotherhood was founded in Egypt in 1928 on the desire to re-establish it. Other groups followed, all of them radical in the sense that they sought to upend the world order by ending what one scholar called “the division of Muslim lands into measly pieces which call themselves nations.”

But many moderate Muslims like the idea as well. Some cite the dysfunction of the Arab world as defined by colonial borders, especially compared to Ottoman times. Others note that Catholics have their pope. “The concept of the caliphate is very much alive in the collective memory of society,” a Turkish author, Ali Bulac, once told me. “There is absolutely nothing to keep Muslim society together at the moment.”

Dignity, or its loss, plays a significant role. Osama bin Laden called the attacks of 9/11 “a very small thing compared to this humiliation and contempt for more than 80 years,” counting from the 1924 elimination of the caliphate. And in its statement asserting a restored caliphate on the lands it holds between Syria and Iraq, ISIS appealed to “generations that were drowning in oceans of disgrace, being nursed on the milk of humiliation.”

Even before the caliphate was officially declared June 29, ISIS, which uses social media masterfully, promoted the Twitter hashtag #sykespicotover. (Mark Sykes and Georges Picot being, as Arabs know only too well, the British and French officials who secretly divided up the Middle East in the waning days of WWI.) ISIS supporters also gleefully posted videos of captured earth movers breaching the berm separating Syria and Iraq.

But the group is radical in more ways than one. Abu Bakr al-Baghdadi, the ISIS founder who now claims the mantle of the Prophet, calls for a war on the 10 percent of the world’s Muslims who follow the Shia tradition. His foundational screed calls for his soldiers to “greedily drink the blood” of non-believers.

“This is something that is characteristic of our time, to reestablish an ideological empire,” a Turkish scholar named Serif Mardin once told me, a look of distaste crossing his face. “A sweet caliph of ancient times is overwhelmed by this modern military idea. I mean, the caliph is supposed to be a nice guy.” That is one thing the new self-declared caliph does not appear to be. 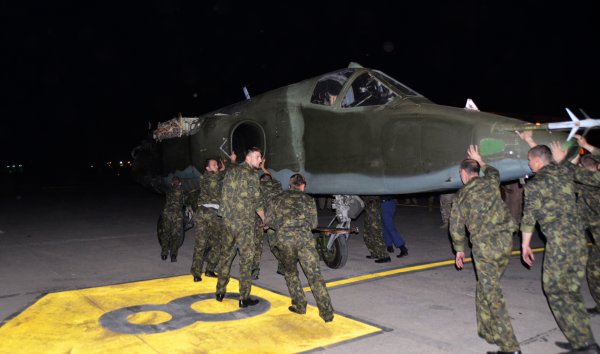 Iraq Warplanes: When Subsonic is Faster than Supersonic
Next Up: Editor's Pick