U.S. Soccer Player Jozy Altidore May Suit Up Against Belgium

US forward Jozy Altidore controls the ball during a Group G football match between Ghana and US at the Dunas Arena in Natal during the 2014 FIFA World Cup on June 16, 2014. AFP PHOTO / CARL DE SOUZA (Photo credit should read CARL DE SOUZA/AFP/Getty Images)
CARL DE SOUZA—AFP/Getty Images
By Alexandra Sifferlin

Team USA forward Jozy Altidore might play in Tuesday’s game against Belgium after suffering from a hamstring strain.

Altidore, 24, hurt his hamstring during the USA’s World Cup win against Ghana. He had to sit out the following games against Portugal and Germany, but he has been warming up on his own.

It’s unclear exactly how much playing time Altidore will have, the Associated Press reports, with U.S. coach Jurgen Klinsmann saying “it’s now difficult to say how many minutes.”

“Just having him with us tomorrow is huge,” Klinsmann added. 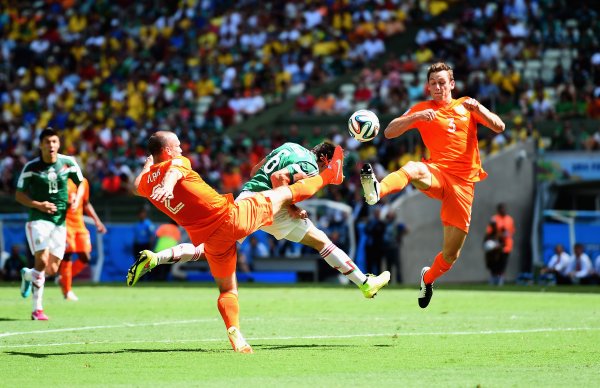 The World Cup Tactical Trend Yielding the Most Success
Next Up: Editor's Pick