After last week’s church sermon, Sookie is still getting the brunt of the town’s vitriol. To make amends and prove her value (or, at least to give her character a purpose during this week’s episode), Sookie is determined to help Sheriff Andy find Arlene, Holly and Nicole. That’s when she remembers to report that she stumbled on a dead body in the woods yesterday. She was too busy pouting to alert the authorities earlier. They find the woman’s remains and discover via her Starbucks card that she’s a resident of Saint Alice, the next town over.

Andy, Jason and volunteer deputies Mayor Sam, Sookie and Alcide head out to investigate, leaving Bon Temps relatively unguarded. Not to fear, because Mayor Sam gave everyone a stern warning to stay inside, not to invite any vampires in and to only leave the house at night under the protection of their vampire buddy system. While the bosses are away, troublemaker Vince decides to go full vigilante. After a gruesome discovery of bodies stored in the freezer (for freshness!) at the bar formerly known as Merlotte’s, he tells the townsfolk about Sam’s shapeshifting, and that is enough to push them over the edge to full riot. They make stakes out of the furniture and then head to the police station to persuade Kenya, the lone remaining deputy, to give up the stash of guns. It’s an argument won by pointing out that decidedly dimwitted Jason was promoted above her, a black woman. Kenya thinks about it for a second, shrugs, and then joins the revolution. Adilyn, Sheriff Andy’s half-fairy daughter who joined the search with her father’s permission, tried to warn Kenya, but was nearly arrested for her trouble. A blast of fairy dust set her free, and also woke her protector, Jessica, from day sleep. Hindered by the sun, Jessica calls the sheriff’s department, and obviously there is no answer. She then calls Sookie, but again, there is no answer, because last week Sookie threw her phone into the woods in a temper tantrum. Jessica has nothing to do but wait and hope.

Over in Saint Alice, Sookie et al. find the town deserted. Despite the fact that vampires are forced to sleep during the day and can’t come inside anyone’s home without permission, somehow the infected vampires have decimated the town’s population. The town is spray-painted in messages exhorting God and/or FEMA to help, but no one is in sight until they find a mass grave that seemingly holds the town’s inhabitants. They find the dead woman’s house and Jason uses his CSI: Pizza Division skills to determine that according to the cheesy oil on the pizza, she has only been gone a day or two. As Jason eats the evidence, Sookie finds the woman’s diary and she can relate to the tragic tale of a woman in love with a vampire. It’s not at all awkward that her new boyfriend, Alcide, is standing right there.

Lettie Mae is still mourning the death of her daughter Tara, but being of the spiritualist mind-set, is convinced that Tara is trapped on some other plane of existence and only her mama can save her. She wants Lafayette to summon Tara’s spirit, but he rolls his eyes and reminds her that her “vision” was a result of drinking vampire blood. It escalates from there, and he calls her a “triflin’ bitch, through and through.” Taking matters into her own hands, Lettie Mae burns herself on the stove and asks her vampire buddy, Willa, for a drop of blood to heal herself. She is rewarded for her efforts with another vision of Tara on a cross with a snake around her (naturally).

Over at Fangtasia, Arlene, Holly and Nicole are still being held prisoner. As the show nears its True Death, there is some chance that all three of these women will simply be eaten while Sookie’s Scooby Squad continues to look for them everywhere except for the local vampire bar. Since the pickings at the buffet are getting slim, Arlene and Holly resort to more cutthroat tactics to stay alive. It gets easier when Arlene recognizes one of their captors as her children’s former schoolteacher. She persuades the woman, who is named Ms. Harris (perhaps in an ode to Charlaine Harris, who dreamed up most of these characters in her novels), to choose someone else as a party snack and passively sits there as another human being is dispatched in her stead. The episode gets its most deadpan disgusting moment, when a vamp tries to snack on Arlene’s femoral artery and is immediately — and mysteriously — reduced to pink slime. Is Arlene vamp poison now?

Last week, after surviving her round of vampire-stake-based Russian roulette, Pam received a clue that Eric was in southern France. This week, she finds him, but he’s not well. He is infected with the virus and may not be long (… er, longer) for this world. The trajectory of the virus is unclear, while it clearly ends in True Death, the path can be slow and seemingly circuitous. Nora died quickly after getting an injection as a test subject, but other infected vamps seem to take their own sweet time before going ashes to ashes. Hopefully a cure can be found before Eric succumbs to the virus, although his death scene would undoubtedly be memorable.

MORE: Downton Abbey Addicts, Get Your 20-Second Fix of the New Season 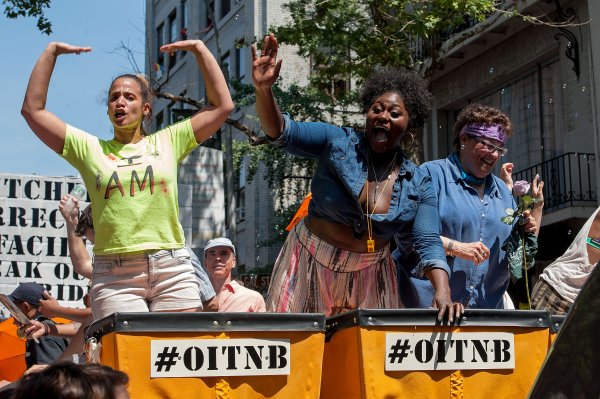 Orange Is the New Black Stars Rock Pride Float
Next Up: Editor's Pick