From Big House to White House: Ex-Convicts To Be Honored By Obama Administration

In this May 29, 2014 photo, Stan Richards, right, an executive with the Fortune Society, listens as Melissa Carter, left, speaks during an interview in New York.
Bebeto Matthews—AP
By Maya Rhodan

Stanley Richards is living proof that giving ex-offenders a second chance can pay off.

Richards grew up amid the drug and gang epidemic that terrorized black communities in early 1980s New York, and spent more time on the streets than in school. After bouncing in and out of jail as a teen, he eventually caught a charge that stuck and was sentenced to nine years in prison for robbery. After serving his time, and collecting a GED an associates degree while behind bars, he wanted to turn his life around. “I began to believe life could be different for me,” Richards says. “Just maybe, through education, things could get better.”

Upon his release, he sought employment at several community organizations but kept getting doors slammed in his face due to his lack of experience. Eventually, the Fortune Society, a Bronx-based non-profit that supports successful reentry, was the exception; it hired Richards as a counselor. And after 23 years of employment and several promotions, Richards will be one of 14 honored by the White House on Monday as a Champion of Change for prisoner reentry.

Richards will be joined at the White House by state lawmakers, business leaders and others, who are gathering to discuss how to reduce recidivism by offering more opportunities for the ex-offender population.

The Obama Administration has been rolling out prison reform policies over the past year in an effort to cut America’s prison budget and save the toughest penalties for the worst criminals. The Administration is also working to provide retroactive relief to some criminals impacted by harsh federal drug laws that have since been reformed. Attorney General Eric Holder announced in April that some prisoners could be eligible for a shortened sentence as a result; the Department of Justice is expecting thousands of applications for clemency this year.

The statistics, as they now stand, are not encouraging. Nearly 68% of released prisoners return to prison within three years. After five years, 76.6% of prisoners are back behind bars, according to the Bureau of Justice Statistics.

There are solutions, however, and states have been leading the way in implementing them. In fact, the Council of State Governments’s “State Pathways to Prosperity” initiative, which is working to smarten states’ approach to criminal justice across all branches of government, was a driving inspiration behind Monday’s White House panel.

The states that are making progress have focused on finding employment and stable housing for ex-convicts when they are released. In Pennsylvania, an overhaul of halfway houses and other corrections facilities has already led to a 24% reduction in recidivism among those who pass through facilities with state contracts. “We’re trying to transform the system by looking at the needs of the community and the needs of offenders,” says John Wetzel, the Secretary of Pennsylvania Department of Corrections, who will be a part of a White House panel Monday to discuss best practices.

Rhode Island Department of Corrections is ramping up its partnership with the state’s Department of Labor to employ offenders upon their release. The director of corrections in Rhode Island, A.T. Wall, has been working in corrections for 38 years, and calls employment and housing the “twin pillars of effective reintegration.” “I have an opportunity to spend a lot of time in our institutions, talking to inmates shortly before release,” Wall says. “When I ask them ‘what do you need,’ the overwhelming majority say ‘I need a job.'”

While the need for ex-offender employment and housing opportunities is obvious to corrections officers, and increasingly lawmakers, private employers and landlords still have to buy in to the idea for it work. And many have been reluctant. “Some employers say it would be wreck less to hire ex-offenders, but wouldn’t it be just as wreck less to say no to employing someone just because they were in state prison?” Wetzel says. “One thing we’ve recognized is that when you have a good outcome in corrections and you can place someone in a job–that’s grassroots crime reduction.”

The Johns Hopkins Hospital system, which will be recognized as a Champion of Change Monday, has been leading the way in employing those with criminal histories. Of the 5,000 people they hired last year, 5% had criminal records. The key, says Pamela Paulk, senior Vice President of Human Resources at Johns Hopkins, is the screening and thoughtful placement of all hires. Recruiters work with the security team, head up by a former Secret Service agent, to make sure potential hires would be a good match for a certain job, depending on what crime they committed.

“We’re not going to put someone with a drug history in the pharmacy department,” Paulk says. The hospitals hiring guidelines also prohibit employing people who have committed violent crimes; those with sex-related histories do not work near patients.

Paulk says she hopes Monday’s event will increase dialogue among hiring managers. “We need more employers willing to expand hiring opportunities,” she says. “Jobs are what ‘s going to help with reducing the recidivism rate.”

For, Richards, who plans to bring his wife, youngest son, and nine-year-old grandson on Monday, it’s a bit more personal. “I’m from the big house to the White House,” Richards says. “That’s pretty powerful.”

Most Popular on TIME
1
What We Know About the Effects of COVID-19 on the Body
2
How Joe Biden Changed the Veepstakes
3
How Did Japan Beat Coronavirus Without Lockdowns or Testing? 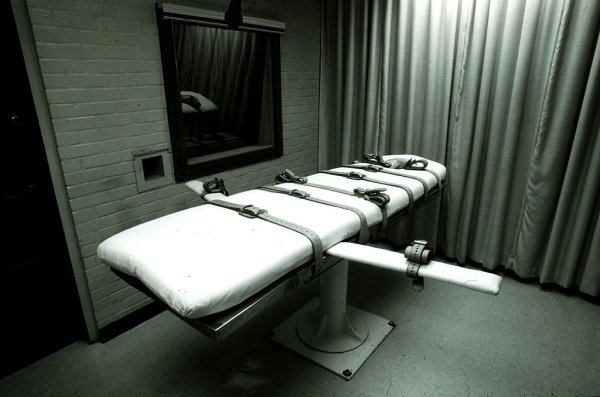