Iraq Leader Under Pressure to Step Aside as U.S. Looks Elsewhere

Iraqi Prime Minister Nouri al-Maliki faced growing pressure Friday to make way for a new government, as the U.S. and its Middle Eastern allies turned to moderate Syrian opposition forces to curtail the growing influence of militants who control vast swaths of Iraq.

On multiple fronts, al-Maliki faced a country largely disintegrating before him. A top Shi’ite cleric urged the country’s parliament to pick a new Prime Minister before Monday, which could lead to the ouster of the highly divisive al-Maliki, a Shi’ite who has been criticized for not reaching out to the country’s Sunnis. Abdul Mahdi al-Karbalai, a cleric who represents Iraq’s Grand Ayatollah Ali al-Sistani, urged a new leader even as he called for national unity in a country that is quickly fracturing between Shi’ites, Sunnis and Kurds.

“Iraqis have passed bigger crises than this in the past history,” al-Karbalai, according to the New York Times. “We must not think of dividing Iraq as part of a solution for the current crises, the solution must protect the unity of Iraq and the rights of all its sects.”

In the north, local officials in the largely autonomous Kurdish region defied the demands of religious and government leaders, suggesting they have no intention of giving up the power they seized when Iraqi troops fled as fighters from the militant group ISIS advanced earlier this month.

“We have presented many sacrifices in the past,” Iraqi Kurdistan president Massoud Barzani told the Times. “Our lands have resorted to their origin identity.”

“The policies of Iraqi Prime Minister Nouri al-Maliki, after eight years in power, have resulted in greater division,” Jarba said, according to a State Department readout of a news conference there. “Now the situation is very grave and there are sectarian militias ruling the country.”

Kerry also met with King Abdullah of Saudi Arabia to coordinate a response to the ISIS militants, whose gains have forced President Barack Obama to deploy a limited number of military advisers to Iraq.

The maneuvering came on a day when officials confirmed for the first time that the American military has begun flying armed drones over Baghdad to protect U.S. troops and officials on the ground. It also followed Obama’s Thursday announcement that the U.S. would provide an additional half-a-billion dollars to support Jarba’s forces, which the White House described as “appropriately vetted” fighters opposing Syrian President Bashar Assad.

Jarba’s group, which is composed of moderate Sunnis, has been fighting radical Islamist militants in Syria, particularly ISIS, as well as the government of Assad. The U.S. and its allies hope that the moderate group will play a key role in ending an insurgency that has given ISIS more territorial control in the region than any other Islamist group in recent memory.

“President Jarba represents a tribe that reaches right into Iraq,” Kerry said. “He knows the people there, and his point of view and the Syrian opposition’s will be very important going forward.” 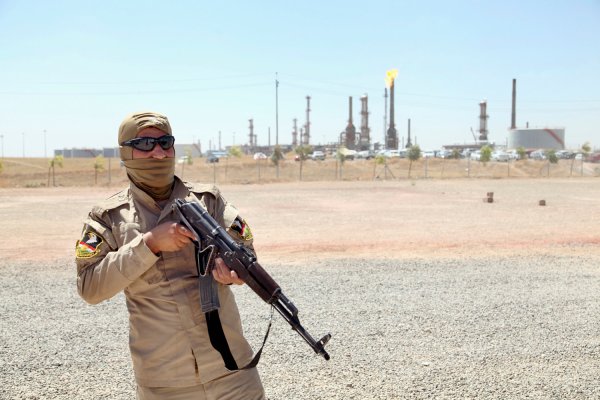 Blood for Oil
Next Up: Editor's Pick