Shailene Woodley: Parents Should Stop Freaking Out About Miley Cyrus

Shailene Woodley in the July issue of Vanity Fair came to the surprising defense of another young female celebrity: Miley Cyrus.

“Miley isn’t rude or mean or cruel to anyone in her actions,” the 22-year-old Fault in Our Stars told the magazine. “She just does herself. And regardless of whether you agree with what she’s doing or not, it’s none of your business what she does.”

Cyrus has been criticized in the past for her less-than-wholesome performances, particularly at the VMAs with Robin Thicke and the sexually themed theatrics of her Bangerz tour, and their potential influence on her young fans.

But, to Woodley at least, that criticism is ridiculous. “She’s not in the world doing mean things. Why are all these parents or all these people freaking out about Miley being herself?” Woodley said.

The young actress also advised parents to redirect their attention to non-Miley-related issues. “If you don’t want your kids to watch it, you know, you can change that situation at home, but don’t make a big deal of what she’s doing,” Woodley said. “Make a big deal about the bullies at school who are beating kids up.” 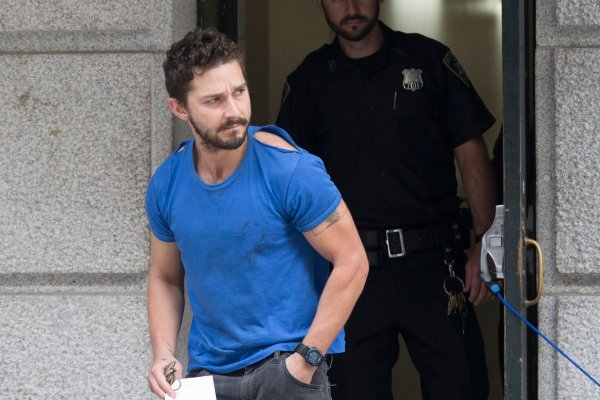 Shia LaBeouf Arrested at Broadway Show
Next Up: Editor's Pick