So, What Just Happened to the U.S. in the World Cup?

The reaction to the U.S. defeat might have been confusing to some. While the players wearily trudged off the pitch in Recife, Brazil with the air of a team that had just suffered a 1-0 defeat to Germany, fans quietly celebrated at home and in the stands. The team later posted celebratory locker room pictures on Instagram. For even though the Americans lost their game on Thursday, they still proceed to the next round of the World Cup. Confused? This Q&A should explain all:

How did the U.S. get ahead without winning?
The U.S. was already at second place in its group before today’s game, after beating Ghana and drawing against Portugal. Two teams from each four-team group proceed to the knockout round of the tournament, so if the U.S. had beaten or tied with Germany, it would have been guaranteed a place in the knockout round. But because the Americans lost, the result of the Ghana-Portugal match—played at the same time—determined who went through. Had Ghana won, the U.S. defeat would have likely knocked them out of the tournament. But Portugal sealed a 2-1 victory over Ghana, guaranteeing Germany and the U.S. first and second places in its group.

Why is there a group stage at all?
In order to stretch a 32-team tournament into a month’s worth of games. The qualifying World Cup teams enter into a draw, and are split into eight groups of four teams. Each team plays three others, and the strongest two in each group enter the knockout round, or final 16. The thinking is that you sort out the strongest teams by letting them play three games, so one upset doesn’t necessarily stop a top team from advancing. Then you get to the final 16 and it’s a knockout. Group play has a long history in international and Olympic Sports. Basketball and hockey do it this way, too, not to mention team handball.

Why were the two games played at the same time today?
The final games in each group stage are played concurrently, so as to ensure both are played competitively. This has been the case in every World Cup since 1982, when West Germany and Austria settled for a listless result in its final group game, in order to kick Algeria out of the tournament and ensure both went through. As well as avoiding gamesmanship, playing the final two games of each group at the same time is a more exciting experience for fans. Had Portugal defeated Ghana before the U.S. played Germany on Thursday, the Americans and Germans might have been tempted to kick the ball about for 90 minutes and score no goals.

Who is the U.S. playing next?
As the runners-up in Group G, the U.S. will play the winner of Group H: Belgium. They’re set to play at 4 p.m. EST on Tuesday.

With reporting by Bill Saporito 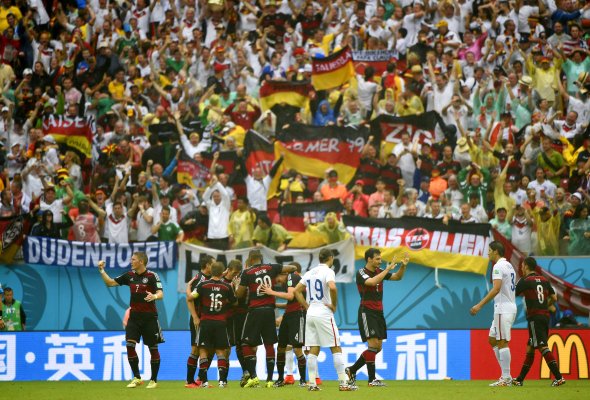 U.S. Falls to Germany, Still Advances in World Cup
Next Up: Editor's Pick