Unemployed and in Debt, Young Americans Ask Congress for Help

For many millennials, the future looks bleak. “We don’t just face dreams that are deferred, we face dreams that are destroyed,” Emma Kallaway, executive director of the Oregon Student Association, told the Senate Subcommittee on Economic Policy Wednesday. But if they were hoping for answers from Congress, Kallaway and other young adults across America facing frustrations with student loan debt and the sluggish job market will have to wait.

Just 63.4% of youth aged 18-29 are employed, Keith Hall, senior research fellow at George Mason University, reported in his testimony. The unemployment rate of workers under the age of 25 is 13.2%, more than twice the overall rate of unemployment.

As joblessness remains high, the cost of college continues to rise, compounding already hard-to-manage debt levels for many young Americans. Student debt in the U.S. now tops $1.2 trillion, according to Rory O’Sullivan, deputy director of the non-profit group Young Invincibles.

“It sounds like perfect storm in a way,” said subcommittee chair Sen. Jeff Merkley (D-OR) of the snowball effects of the Great Recession on young adults.

Youth unemployment also affects overall spending in the broader economy because young adults cannot afford to move out of their parents’ house, buy big items like cars and homes, and get married. Taxpayers bear some of that burden. Youth unemployment deprives the federal government of over $4,100 in potential income taxes and Federal Insurance Contributions Act taxes per 18-24 year old every year, and almost $9,900 per 25-34 year old, according to a recent study by Young Invincibles. That translates into an additional $170 of entitlement costs per taxpayer in the federal budget.

If the problem is clear, the solution is not. Witnesses at the hearing variously suggested state disinvestment in higher education, simplifying the federal aid application and repayment process, offering relief for existing borrowers, and holding institutions more accountable for providing affordable, quality credentials to graduating students.

Merkley asked the panel for their opinions on the merits of the “Pay It Forward” Guaranteed College Affordability Act, which would allow students to go to college without paying up front. Instead, students sign a contract to join an income-based repayment plan for a designated period of time after graduation. Several states are considering versions of the grant plan; Oregon signed one into law in 2013.

Although Kallaway and O’Sullivan said the plan would possibly circumvent the debt-to-income trap, both agreed it was not a long term fix. Kallaway believes the solution is to tackle the problem at the root, in high education costs, and not at the repayment level. “More affordable education upfront is what’s right,” Kallaway said. “Federal student loans should not be a form of income for the government.”

Hall believes that student debt and rising tuition are just symptoms of a larger disease. High unemployment numbers aren’t just an issue for young adults, he pointed out. The problem, he said, is a poorly functioning economy. “Until you solve this labor market problem […] this problem is not going away,” he said. “You’re going to have these continuing symptoms.” 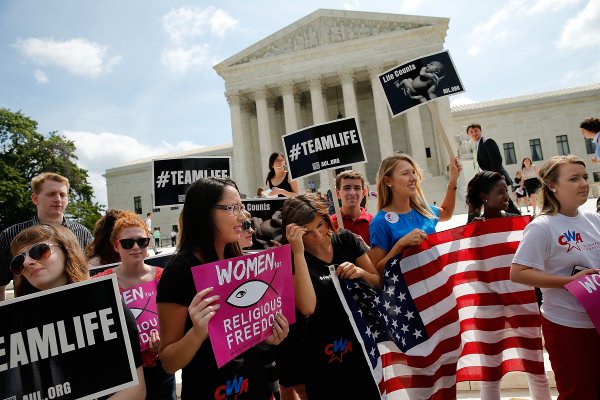 A (Constitutional) Guide on Where to Stand When Protesting
Next Up: Editor's Pick