My Wife's Abortion vs. Your Free Speech

By Aaron Gouveia
A truck covered with anti-abortion messages is used to protest the opening of a Planned Parenthood clinic in Aurora, Ill., on Oct. 2, 2007.
Scott Olson—Getty Images

It’s a little more than half the distance from home plate to the pitcher’s mound on a baseball diamond. It’s slightly longer than the length of two Cadillac Escalades. It’s 5 ft. shorter than a standard telephone pole.

And until today, when the Supreme Court unanimously ruled the buffer zone unconstitutional because it allegedly infringed on free-speech rights, it was the distance anti-choice protesters were forced to stay away from people entering abortion clinics in Massachusetts.

That’s how U.S. Supreme Court Justice Elena Kagan described the 35 ft. during oral arguments in January. And I guess it is a lot of space—depending on your perspective. For Justice Kagan, 35 ft. on a tape measure might seem like a lot. But I have a slightly different perspective, one that is far more personal and relevant to this particular issue.

In 2010, my wife and I went to a Brookline, Mass., abortion clinic after a team of renowned Boston doctors diagnosed our 16-week-old unborn baby with Sirenomelia. Our baby’s legs were fused together, but that wasn’t the worst of it. The baby had no kidneys, no bladder and no anus. We were given the heartbreaking news that there was a 0% chance of a live birth.

Because my wife’s health wasn’t in immediate danger, the hospital couldn’t get her in for a termination for two weeks. However, that meant it’d be a 50/50 chance of being able to have an abortion or having to deliver a stillborn. After much soul searching and contemplating a no-win scenario, my wife decided a stillbirth was more than she could handle and so the hospital sent us to a recommended clinic to perform an abortion.

When we pulled into the parking lot and got out of our car, the saddest day of our lives got exponentially worse.

Two women, 35 ft. away, were standing across the street holding signs. When they saw us, they immediately started yelling things like “Don’t do it!” and “You’re killing your unborn baby!” I couldn’t have been more horrified. I couldn’t believe how these people would willingly stand outside and harass others at their weakest and most vulnerable. I couldn’t mask my anger, nor could my wife hold back her tears at being unnecessarily and unfairly vilified.

But you know what I could do? I could hear them.

I heard them exercising their First Amendment rights from across the street. I heard them over the din of passing traffic. I heard them from 35 ft. away. Loud and clear.

Those protesters made every use of their right to free speech. Even with a 35-ft. buffer zone, they delivered their message of shame and guilt with ease. In fact, the only thing that was restricted that day was my wife’s ability to walk into a medical facility free from harassment.

And ironically, when I went out to videotape a conversation with them after my wife was in surgery to challenge them in a nonviolent manner, it was the protesters who threatened to call the police and have me removed.

So, Justice Kagan, with all due respect, 35 ft. is not a lot of space when you’re shouting insults at strangers and judging them absent any facts. What it does do, however, is put some very important space between emotionally volatile people enduring copious amounts of heartbreak and those who seek to shame them. Space that could be the only thing preventing physical altercations and scuffles. (The Brookline clinic is where John Salvi shot and killed two Planned Parenthood workers in 1994.)

Had SCOTUS upheld the constitutionality of the buffer zone it would’ve preserved the free speech of the protesters while ensuring women have unobstructed access to the buildings that house their reproductive-health specialists. But without that separation, I worry how often and to what degree future conflicts will escalate.

Too much space? With all due respect, Justice Kagan, 35 ft. wasn’t nearly enough to block out the horror and insults while running the gauntlet that day at the hands of those whose free speech you seek to protect.

Even after 35 ft. and four years later, my wife and I still hear them. 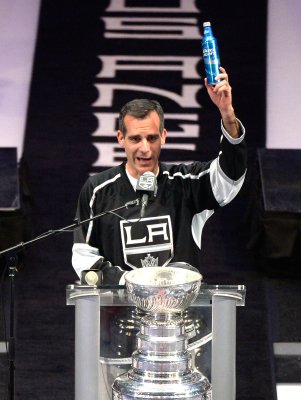