Coalition of the Unwilling

Election results always have business impacts. But rarely are they as stark as the drop in Boeing stock that followed the defeat of Republican House majority leader Eric Cantor in the Virginia primary on June 10. Cantor, an ally of Big Business in Congress, was defeated by David Brat, an economics professor who has been called the Tea Party’s Elizabeth Warren, an outsider pledging to make capitalism fairer for the little guy. He’s also a proponent of cutting federal subsidies to firms like Boeing–hence the one-day stock drop that wiped out its gains for the year–as well as ending “special tax credits to billionaires.”

What Brat’s victory really highlights is a quirk in our politics that is bringing the far right and far left into a series of unexpected alignments. In addition to being anti-Establishment, Brat’s speeches are often anti-immigration and antiglobalization. But when it comes to such economic-policy issues as taxes, free trade and corporate welfare, a lot of Democrats are, more or less, in agreement with him. (Brat’s office did not respond to interview requests.)

Brat, along with many members of the Tea Party and plenty of people on the far left, would like to see some bankers thrown into jail for their role in the financial crisis. These critics argue that corporations benefit unfairly from government subsidies. (Cantor was a booster of the Export-Import Bank, which Boeing’s foreign customers can tap for U.S. taxpayer–subsidized loans.) They believe the rules of free trade are no longer working when China and others can flout them without consequence. And they’d like to see a tax code that doesn’t explicitly favor the superrich.

To be sure, the philosophical underpinnings of Brat and Warren are vastly different. Populists on the left are against measures like fast-track authority for President Obama–which would allow him to bypass Congress when negotiating trade deals–on policy grounds. They believe that such deals in the past sped the offshoring of America’s industrial base, which ultimately erodes our economic competitiveness. Some on both sides of the aisle argue that trade agreements that used to be about tariffs and quotas increasingly focus on domestic issues such as taxes, financial-services regulation, patents and food- and product-safety rules. Says Michael Stumo, who runs the Coalition for a Prosperous America, an advocacy group that represents agriculture and manufacturing businesses across the U.S.: “Modern trade deals are more about globalizing domestic policy and offshoring our jobs, our industries and our governance.”

On the right, members of the Tea Party are skeptical of free-trade deals because they see them as threats to national sovereignty. As Representatives Michele Bachmann and Walter Jones and a number of other conservatives in Congress put it to President Obama in a letter opposing fast track, “For 200 years of our nation’s history, Congress has led our nation’s trade policy,” and conservatives aren’t interested in giving up that privilege.

These aren’t extreme positions. A recent Gallup poll found that 38% of Americans see foreign trade as a “threat to the economy.” A majority of Americans also support tax reform, in particular higher taxes for the wealthy. Part of the momentum around that issue is, of course, driven by an American economy in which the rich have gotten ever richer since the financial crisis while everyone else has struggled. That’s another topic that the flanks in both parties largely agree on–the people who caused the pain of the past six years still haven’t paid for it. “Those guys [meaning financiers] should have gone to jail,” said Brat in the run-up to the Virginia primary. “Instead of going to jail, they went into Eric Cantor’s Rolodex.”

What could this unlikely alliance mean in political terms? Not much in the short term. In some ways, the coalition of Occupy Democrats and Tea Party Republicans is a Coalition of No. Bipartisan opposition has so far stalled fast-track authority for the President’s trans-Pacific trade deal. Coming up with a new trade agenda that could actually reshape policy is a (slow) work in progress. Republican Dave Camp’s tax-reform plan, reflecting popular anger over plutocrats, includes higher rates for hedge funders and private-equity titans, but it faces long to impossible odds against Big Business lobbyists and their lackeys on both sides of the aisle. Still, the Coalition of No is just getting started. If this year’s midterm elections put more Tea Party Republicans in office, it could increase the number of legislators, like Brat, who have something in common with the left: an anticorporate bias. That, in turn, would make for a very different 2016 presidential election than anybody currently imagines. 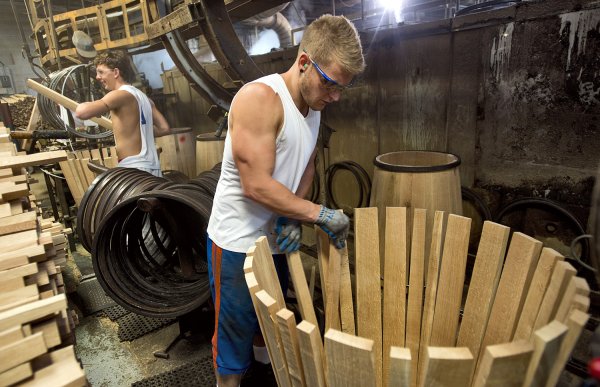 Barrel Mania
Next Up: Editor's Pick