Nest CEO Tony Fadell on The Future of the Smart Home

Tony Fadell is not a fan of the one button. If you grew up watching The Jetsons, you know the one. It’s the button that automatically dims the lights, draws the blinds and spins the record player. “The problem with the one button is that the one button shouldn’t do the same thing for everyone,” says Fadell, the 45-year-old CEO of Nest Labs. “The truth is, homes change over time–and technology has to adapt, not try to do everything at once.”

If Fadell’s philosophy matters, it’s in no small part because four-year-old Nest has helped kick-start the current boom in connected gadgets. The company’s first product, also called Nest, was a $250 thermostat that learns the habits of its users in order to save energy–automatically lowering the temperature when nobody’s home, for example. Its second, the Nest Protect (current price: $100), was a smoke and carbon monoxide alarm that gives voice alerts and can differentiate between burning toast and actual emergencies.

By now it’s clear that Nest plans to work its way through the average American home, looking for staples to make smarter–much as its CEO reimagined the music player and the mobile phone during his 2000s gig as a senior vice president at Apple. (Fadell is known in Silicon Valley as the Godfather of the iPod.) And it will do so alongside a powerful partner: Google, which in January acquired the company, based in Palo Alto, Calif., for $3.2 billion.

But Fadell’s view of smart gadgetry differs greatly from that of most of his competitors. When he set out to reinvent the thermostat, the prevailing thinking was that it would turn into a miniature computer. Manufacturers “were adding photos. They were adding a calendar. They were adding the weather,” he says. In other words, they were loading thermostats with bells and whistles, but they weren’t actually making them work better. “It made no sense to me,” he says. “How about we look at the basic function of this device and not overly complicate?” The same could be asked of the connected-home market, now brimming with hundreds of products–wi-fi-enabled toothbrushes, touchscreen toilets, toasters that can tweet–all claiming to be “smart” simply because they can do the same things your tablet can.

Fadell argues that truly smart gadgets should have built-in intelligence like the Nest thermostat. They should be able to automatically adapt to your wants and needs, so you don’t have to think about them if you don’t want to. “We have enough technology trying to take our attention away, trying to give us an excuse not to talk to each other,” he says. Instead, he says, he’s designing products for the conscious home–“the home that is aware of what your family is doing and tries to help you,” as he puts it. In that habitat, there will be no one button. Because the smartest technologies may not even require your input.

Fadell was born near detroit and grew up in a large family of Lebanese and Polish-Russian descent. He attended 12 schools in 15 years as the family shuffled around the country, a result of his father’s sales job with Levi Strauss. On visits home, his grandfather–a superintendent of schools and a handyman–encouraged a love of tinkering, and Fadell became fascinated with electronics. Because he moved so much, he says, “computers became my way of communicating.”

Fadell was a natural entrepreneur too. In his spare time at the University of Michigan, where he studied computer engineering, he started two companies. One made educational software; the other manufactured microprocessors to speed up Apple II computers. He sold the latter to Apple before graduating and moving to Silicon Valley.

Bald and broad-shouldered, Fadell has a tendency to get worked up when he’s on a roll, darting his blue-green eyes in your direction to make sure you’re still with him. “There was always a joke that when Tony gets excited, you have to watch his chair,” says Yves Béhar, the award-winning industrial designer and chief creative officer at Jawbone, who first met Fadell in the late 1990s. “In meetings he would get up and bounce around–literally like a bouncing ball. A couple of times he broke the chairs in my office.”

In 1991, Fadell’s tech enthusiasm led him to a job at General Magic, one of those Silicon Valley footnotes that made products that were ahead of their time. It was also a hotbed of young talent. As a 20-something, Fadell worked alongside Pierre Omidyar, who later founded eBay, and Andy Rubin, the creator of Google’s Android mobile operating system. “We basically created the technology for the iPhone 20 years too early,” he recalls.

But there and during a later stint at Philips trying to create early handheld computers, Fadell found that mere excitement about underlying technology was not enough to make a hit product. By the time Steve Jobs persuaded him to take a full-time role at Apple working on what would become the iPod, he was convinced that marketing and a keen sense of what not to put in were just as important as engineering. The success of the iPod and, later, the iPhone validated his thinking.

Fadell left his full-time job at Apple in 2008, taking a year and a half to travel with his wife Danielle Lambert, a former Apple vice president, and their children. He also threw himself into designing a second home, near Lake Tahoe. As he imagined the hallways and rooms of his yet-to-be-built house, he came to see dozens of items that could benefit from better brains. That’s when he hit on the idea of a smarter thermostat.

“Tony said, ‘There is no iPod of thermostats,’ and I was on board immediately,” recalls Matt Rogers, Fadell’s former intern at Apple, whom he approached over lunch in October 2009. (Rogers, now Nest’s co-founder and vice president of engineering, was also the first software developer for the iPhone.) Fourteen months later, they had a working prototype. The company’s gadgets were soon widely heralded–including in TIME, which named the Nest Protect one of the 25 best inventions of 2013.

Nest and Nest protect are just phase 1 of the company’s plan to reimagine the household. Rogers, like Fadell, is convinced that much of the smart-home gear that’s currently in vogue among designers–kits that plug into and control a variety of appliances, for example–is overly complex and inelegant. “Nobody wants to buy [that kind of] smart home. It’s for geeks,” says Rogers. “People want to buy great products. It should be all these little touchpoints that make your life simpler.”

Rogers is particularly excited about Nest’s new open platform, which will enable devices to talk to one another without a lot of babysitting by users. For instance, beginning this summer, some Mercedes-Benz vehicles will be able to communicate with Nest thermostats to automatically adjust a home’s temperature according to how long it will take you to get back from work that day. Similarly, Jawbone’s wearable fitness trackers–which know when you are about to wake up in the morning–will be able to raise the temperature just as you get out of bed. As for more hardware, Fadell won’t reveal specifics, though on June 23 the company announced it would acquire home-security-camera maker Dropcam for $555 million. Says Fadell: “We look for unloved products, the things that haven’t changed since I was a kid.”

There will be obstacles. Competition, for one, is growing. Honeywell, the giant manufacturer of thermostats, introduced a Nest competitor in June that it dubbed Lyric. And earlier this year, Nest issued a software fix for 440,000 smoke detectors when it determined that a defect could cause an alarm to be delayed. A later bulletin from the Consumer Product Safety Commission generated unflattering recall headlines.

Then there’s Google. Although Nest is being operated independently of its search and data parent, that hasn’t stopped some from speculating about targeted ads appearing on connected Nest devices. Rogers and Fadell reject the idea, saying the data their company collects won’t be shared without customers’ explicit permission. For Nest, too much is at stake. Its future depends on getting users to trust technology to learn about them in the most private settings. If anyone knows how to do that, it’s the man who helped create the iPod and the iPhone, two of the most lionized gadgets ever. “At Apple, we changed society,” Fadell says, somewhat contemplatively. Now he’s trying again. 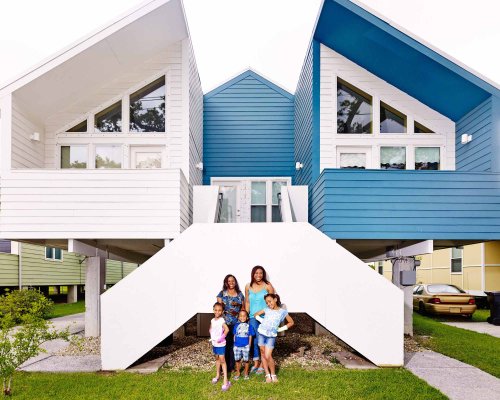 Meet the Regular People Living in America's Smartest Homes
Next Up: Editor's Pick