One Man's Mission to Turn Tetris into a Spectator Sport

In general, the biggest audience you’ll get to showcase your Tetris skills for are the bored commuters sitting next to you on the L train.

But Henk Rogers, managing director of The Tetris Company who helped bring the Russian game out of the Soviet Union and into the Western world, has bigger plans for the game than serving as a detox from Tinder swiping. Rogers is on a mission to turn Tetris into a full blown spectator sport.

Why hasn’t it happened already?

In an interview with Wired, Roger explained, “Most people have never seen a good game.”

And he doesn’t think filling arenas, or at least living rooms, is a huge stretch. After all, Roger explained that when he was a surf bum in the 70’s, no one would ever have imagined it would turn into a lucrative, sponsor driven, athletic activity. People already gather to watch action-fueled video games. In 1894, men gathered in Chicago parks to watch centipedes and tarantulas fight to the death. And, I mean, a lot of people watch golf. For hours.

“I think in the next five to 10 years, Tetris will go from being a solitaire game to being a community game, a cooperative game,” Rogers told Wired. “I see professional players. I see a Tetris league. I see competition between cities, between colleges. Just like we have athletic teams today, we’ll have Tetris teams.”

The only thing is he had a similar mission five to ten years ago.

In 2007, Tetris hosted its first-ever Tetris Cup Challenge. At the time, Rogers told the Pacific Business News that he had dreams to “start up a league of professional Tetris player and start sponsoring tournaments worldwide.” That didn’t really happen.

The thing with Tetris is that it can get very repetitive. Alexey Pajitnov, who made the original, told Wired, “We’re still struggling with two-player modes in many versions… I have a feeling that we are not there yet.”

But maybe soon. A next generation version of Tetris will be available on PlayStation 4 and Xbox One later this summer.

Will you invite friends over to get entranced by its Tron-esque sounds and colors? 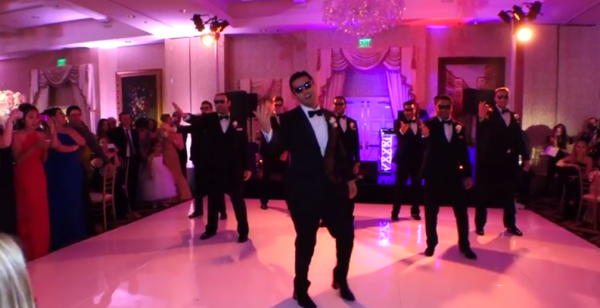 You'll Fall 'Crazy in Love' With These Groomsmen After Watching Their Incredible Wedding Dance
Next Up: Editor's Pick