U.S. vs Germany: Get Ready for a Nail-Biter

Months before the World Cup, I had a chance to discuss Thursday’s U.S. vs. Germany game with Jürgen Klinsmann, the German-born head coach of the American team. In Germany, of all places. “If it’s necessary to sit back maybe a bit more against Germany,” he told me, “then we have to take that approach. Because it’s a one-time game and maybe it makes it possible to get to the next round. But if we feel like, no, we’re actually ready to go at them, then we make that call.”

So what call will Klinsmann make in Thursday’s game? The U.S. needs a draw against Germany to guarantee passage to the next round of the World Cup—an outcome that would suit Germany just fine, too. Do the Americans hang back and hang on, like Italy tried to do, unsuccessfully, against Uruguay? Or does the American team play the way Klinsmann ideally wants it to play, and go for a win against Germany, knowing that a loss could end its World Cup? Klinsmann has already said that his team “will give everything to beat Germany” but sentiment often gets slide-tackled by tactics.

Germany’s general strategy is certainly no mystery to Klinsmann, since he helped create it when he was Germany’s coach at the 2006 World Cup. He is friends with German coach Joachim Loew, his former assistant, as well as with a number of German players. “It’s going to be emotional, there’s no doubt about it.” he said in a press conference yesterday. “But I also will enjoy it.”

Klinsmann obviously had no idea during our March conversation what the circumstances would be in late June. He was addressing his plan to turn the U.S. into an attacking, uptempo team. Traditionally, the U.S. has been a hang-back-and-wait-for-an-opening type team. The transition to a proactive game from a reactive one is tricky, though: “Right now yet we don’t know how far we are in that process,” Klinsmann said at the time.

The U.S. team’s performance in its first two matches didn’t answer the question. Against Ghana, Clint Dempsey scored a gem early and then the U.S. hung on for the next hour or so, while Ghana attacked relentlessly, eventually knotting the score. Substitute John Brooks’ bail-out header late in the game won it. Against Portugal, the U.S. sensed a weakened team and attacked like it meant business, only to be punished by early and late mistakes.

Germany has some thinking to do, too. Although Germany dismantled Portugal in its first game, the Germans got some help from a Portugal red card in the 37th minute. Ghana, on the other hand, was able to mount sustained attacks against Germany, including 20 shots at goal, with the play of wing halves Christian Atsu and Andre Ayew. That’s a style that the U.S. can employ too.

The Americans have to be aware of the fearsome German counterattacks, with Mesut Özil at the fulcrum and Thomas Mueller providing the finishing. Germany has torn teams like England to shreds employing it. And don’t forget what former U.S. keeper Kasey Keller calls “monsters in the box.” Germany has always relied on scoring goals by winning free kicks or corner kicks and sending a bunch of giants into the penalty box for headers. This team is no different: it has 3 outfield players who are 6-ft 3-in. or better, including the 6-ft 5-in. Per Mertesacker. The Americans are going to have to smash some heads to defend.

One of the more intriguing questions of the game: How will our Germans do against their Germans? Fabian Johnson and Jermaine Jones, the German-raised sons of American fathers, and now playing for the Red, White and Blue, have played fantastically well. Midfielder Jones scored a wonder of a goal against Portugal. Right back Johnson has panicked defenses with his outside runs. Against their half-countrymen, they need to be even more outstanding.

There’s going to be some psychology and gamesmanship going on, too. Both teams know a draw will do, so if the score is tied say, 60 minutes into the match, the less inclined the players will be to take risks. That’s natural. At the same time, the coaching staffs will be listening to the Ghana vs. Portugal game, which will take place simultaneously. A draw there and both the U.S. and Germany are safe. If Ghana is winning by a couple of goals, though, the U.S. might not qualify for the knockout round if it loses. Look for late and dramatic tactical changes if that’s the case. This thing has nail-biter written all over it. 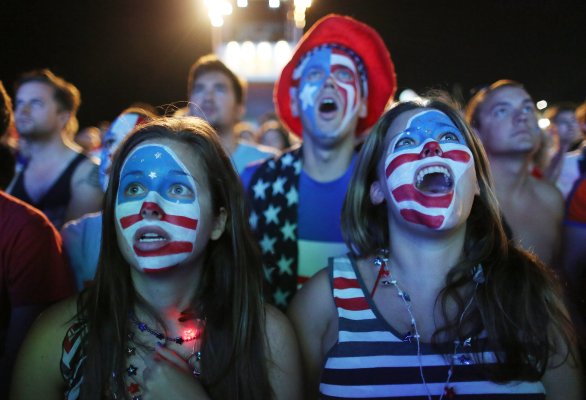