Gary Oldman apologized Tuesday for an interview in which he defended anti-Semitic comments other actors have made in the past.

In an interview with Playboy, Oldman said actor Mel Gibson “is in a town that’s run by Jews.” He apologized for using anti-Semitic stereotypes in a letter to the Anti-Defamation League on Tuesday.

“I am deeply remorseful that comments I recently made in the Playboy Interview were offensive to many Jewish people,” he wrote. “Upon reading my comments in print—I see how insensitive they may be, and how they may indeed contribute to the furtherance of a false stereotype. Anything that contributes to this stereotype is unacceptable, including my own words on the matter.

“I hope you will know that this apology is heartfelt, genuine, and that I have an enormous personal affinity for the Jewish people in general, and those specifically in my life,” he added.

Oldman gave an expletive-filled interview to promote his new film, Dawn of the Planet of the Apes. In the story, the actor denounced the “political correctness” that has hurt the careers of fellow actors Mel Gibson and Alec Baldwin. Each of those two actors has a history of making offensive comments: Gibson went on an anti-Semitic rant in 2006 while he was being arrested for drunk driving, and Baldwin was accused of using an anti-gay slur last year. Both have since apologized for their comments.

The Dark Knight star defended Gibson saying he “got drunk and said a few things, but we’ve all said those things. We’re all [expletive] hypocrites.” He went on to say: “Mel Gibson is in a town that’s run by Jews and he said the wrong thing because he’s actually bitten the hand that I guess has fed him, and doesn’t need to feed him anymore because he’s got enough dough.”

The Anti-Defamation League, however, is not impressed with Oldman’s apology. “We have just begun a conversation with his managing producer. At this point, we are not satisfied with what we received. his apology is insufficient and not satisfactory,” ADL national director Abraham Foxman told the Hollywood Reporter. 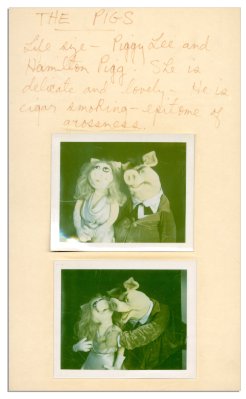 Before She Was Miss Piggy, This Muppet Went By Another Name
Next Up: Editor's Pick