Bill Clinton: Hillary Is 'Not Out of Touch'

Former President Bill Clinton listens during a session of the annual gathering of the Clinton Global Initiative America in Denver on June 24, 2014
Brennan Linsley—AP
By Zeke J Miller

Former Secretary of State Hillary Clinton has come under fire from Republicans and some Democrats for minimizing their wealth in recent interviews in promotion of her new book. Hillary Clinton said earlier this month she and her husband were “dead broke” when they left the White House in 2001, and in an interview with the Guardian newspaper published last weekend, Clinton implied she was not among the “truly well-off,” despite more than $100 million that the former President has collected from speaking engagements alone.

The criticisms are undercutting Hillary Clinton’s efforts to highlight populist economic issues in preparation for a possible presidential campaign and lending to an image that she can’t relate to average Americans.

The former President told NBC News’ David Gregory he was not surprised the subject of their wealth came up, suggesting it was an effort by Republicans to “change the subject.”

“It is factually true that we were several million dollars in debt,” Bill Clinton said in an interview airing this week on Meet the Press, in reference to the millions in legal fees they racked up in the White House. “Everybody now assumes that what happened in the intervening years was automatic; I’m shocked that it’s happened. I’m shocked that people still want me to come give talks.”

With his wife and daughter looking on, Bill Clinton asserted that they do normal things in the tiny New York suburb of Chappaqua, the location of one of their two homes.

“The idea that now, after — I think I had the lowest net worth of any American President in the 20th century when I took office, but I still could have been tone-deaf,” said Clinton. “And, you know, now I don’t, and we’ve got a good life, and I’m grateful for it. But we go to our local grocery store on the weekend. We talk to people in our town. We know what’s going on. The real issue is if you’ve been fortunate enough to be successful, are you now out of touch and insensitive to the agonizing struggles other people are facing? That’s the real issue.”

Asked whether he could see why the potential 2016 Democratic presidential candidate’s comments were drawing accusations that she was out of touch, Bill Clinton said he could, adding “but she’s not out of touch.”

“She advocated and worked as a Senator for things that were good for ordinary people,” he continued. “And before that, all her life. And the people asking her questions should put this into some sort of context.”

Watch the video of the exchange below: 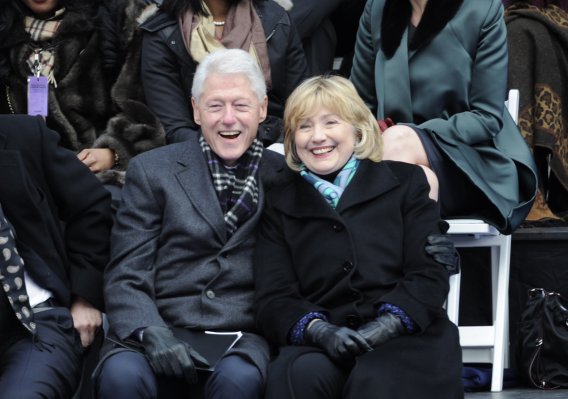 7 Songs We Want to Hear in the Upcoming Clinton Musical
Next Up: Editor's Pick