Kim Stolz: How Social Media Is Ruining Our Relationships

Our obsession with our smartphones has not only changed the way we spend time, but the way we feel and think. In her first book, Unfriending My Ex: And Other Things I’ll Never Do, Kim Stolz, the former contestant on America’s Next Top Model who now works on Wall Street, talked to TIME about how social media has shaped her generation, digital breakups, people who check their phone during sex, and what it’s like to Google yourself when you’re an ex-reality show star.

Read the review of Unfriending My Ex.

You say in the book that you’re always thinking about text messages when you’re doing something else. If someone doesn’t text us back immediately, we feel like we’re not important enough for them to respond. Why do we connect these insignificant messages so much to our self worth?

I think the rise of social media is definitely correlated with the rise of narcissism in our society. Our self-esteem depends on how many likes we get, how many followers we get, if someone texts us back.

And I think when you see your phone light up from across the room, it’s that ping of dopamine in your system. You get that euphoric, excited feeling, and I think that’s addictive. Now we text people, we Instagram, we Vine, we Tinder just to feel that again. And the more we do it, the more we get it back, so it becomes a very addictive process.

It really is all about narcissism. Some coworkers and I were talking about how when we FaceTime, we just end up looking at ourselves in that little box.

My favorite thing about FaceTime is literally you should just be on the phone with someone looking in a mirror because all I do when I FaceTime is look at myself. I bring the box up so they think I’m looking at them, but I’m not. The art of FaceTiming so that people think you’re looking at them but you’re actually looking at yourself is kind of amazing. I think we all do it, but it is another symptom of that narcissism that’s just become so prevalent today with the rise of social media and smartphones.

But even when we fulfill this urge to make ourselves feel better by bragging via an Instagram picture about a great meal we had or an awesome concert we went to, it seems like that happiness is diminished once we look at other people’s feeds.

I do think we’re all kind of in this big, worldwide reality television game. And we’re all competing to see who has the best life with the best boyfriend or girlfriend having the best meals on the best vacations with the best families and the best dogs. There is this competitive element.

But just as quickly as I might scroll through Instagram and see 100 people liked a photo of me, and that makes me feel good, the next moment I might see all of my friends hanging out the night before and wonder why I wasn’t invited and feel extremely lonely about that. Now more than ever there are some major highs and really depressing lows, and they come so close together. So you begin to feel numb to genuine emotion.

Getting back to this idea of addiction: You took an informal survey of your friends and found that 10% of them had checked their phone during sex at some point. That’s crazy!

You’d think [admitting some of these things] would be embarrassing. But then you kind of realize that you’re all going through it.

At what point do you know then that someone has gone too far? In the book, you talk about someone who became obsessed with Follow My Friends and stalked a boyfriend using the app. So what is the line?

You know you’ve taken it too far is when your friends start commenting on it, like any kind of addiction. I actually dated someone who once—and I really liked her—who literally lost interest in me because we went on a date, and I spent the entire time on my phone. I used to go to dinner with my friends where they would say, “Okay, Kim, I’m taking your phone.” When you start getting those comments, that’s one of the signals that you need to stop. Maybe when you write a whole book about it and realize you’ve gone too far. [Laughs]

So do you think technology often negatively affects relationships?

Yeah, I think a lot of relationships have been ruined by one person’s addiction to social media, whether that addiction leads to a connection with a past love or crush—and that can be detrimental—or sometimes it simply means that you get home at night to spend time with your significant other and you have nothing to talk about because you’ve spoken about everything all day through social media or you’ve looked through each other’s social media feeds.

There’s been an emerging body of research that shows that when you stop having offscreen interaction, you lose empathy. You lose the ability to have genuine reactions to real problems and real things. [In her book Stolz cites a study that found college students are 40% less empathetic than they were 30 years ago, thanks to on-screen interactions that make it easier to say mean things and act before considering the consequences of our actions.]

You talk about a breakup that you had that was induced by Twitter, texting and Facebook. Do you think that social media leads to more breakups or just makes them happen faster than maybe they otherwise would?

I think both. Social media has definitely accentuated and accelerated breakups. But I also think that we as humans are an impulsive group of people, and I think social media provides not only an indelibility for relationships in the past—where you just can’t seem to get away from them so you just keep thinking about them—but it also provides a really easy avenue to be impulsive to reconnect and make mistakes.

I’ve seen a lot of relationships ruined not because they weren’t going to work out, but because someone reconnected with an ex innocently, and that led to constant text messaging. And before you know it, they’re meeting up. And if you make a mistake, you get caught because of social media because there is a paper trail for everything. And it’s over.

How do we keep ourselves from doing something like that?

The thing about temptation is it’s a grey area. Is it cheating if I follow my ex on Twitter? Maybe not. Is it cheating if I gchat with my ex about a time we had together? Maybe a little closer. Is it cheating for me to drunk text my ex at three in the morning? Probably. You can fool yourself into saying it’s not really cheating when you’re just texting. A way to prevent any of that from happening is having clear cut rules at the beginning of a relationship.

You did a ‘digital detox.’ How difficult was it to abstain from all tech for a week?

It was very hard. People laugh at me that it was only a week, but it really was very difficult. When you’re on your phone thousands of times a day and goes to zero, it’s an out of this world experience. I never thought to call it a detox until I did it. Really the first couple of days, I was antsy. I was seeing my phone where it wasn’t. I would see flashes on the couch next to me expecting it to be my phone and reach over and it wasn’t there. I was insecure about my friendships because I wasn’t involved in the constant interaction online.

But then after a couple of days of this anxious feeling, I started calming down a little bit. I saw things on my street that had probably been there for years but I had never seen before because my head had always been down in my phone. I started having real conversations with people over the phone, and it made me closer to my friends. I started to self reflect and have introspection, which I think is one of the things we’ve lost. Introspection makes people really secure and confident because you get to know yourself.

What are your favorite apps or uses of tech? And what ones have you been turned off by, possibly as a result of writing this book?

I think I’ve been turned off of Facebook. I think that Facebook has become more of a medium for self-promotion. I think a lot of people have moved away from it. And I personally am just so tired of seeing people’s inspirational quotes.

I’m a big fan of Instagram. I like that you kind of follow a specific number of people. I also think that Twitter is a great app because it’s very informational. I use it for news. It actually can enrich you intellectually if you follow the right people.

I think SnapChat is fun. It can be dangerous. I’m not sure how long of a shelf-life it has based on the way I see people using it.

What about the way people use SnapChat makes you think it doesn’t have a very long shelf life?

Yes there are a lot more annoying and terrible photos to see. [Laughs]

Do you watch old clips? What’s that feel like to go back?

In terms of my Top Model days, I don’t really go back and look at those a whole lot because there are a lot of parts of that experience that I would like to forget. It’s interesting: I was never obsessed with the fame. I remember being in the house with those girls, and some of them were just like, “I can’t wait to be famous.” And I ended up on the show because I lost a bet with some friends and was dared to. So it wasn’t about becoming a household name for me.

But every once in awhile, I like to see if one of those really mean blogs has written terrible things about me. Once I went on Wikipedia, and it said I had died. That’s the only time I’ve changed my Wikipedia page because it just seemed like terrible luck to be dead on Wikipedia. 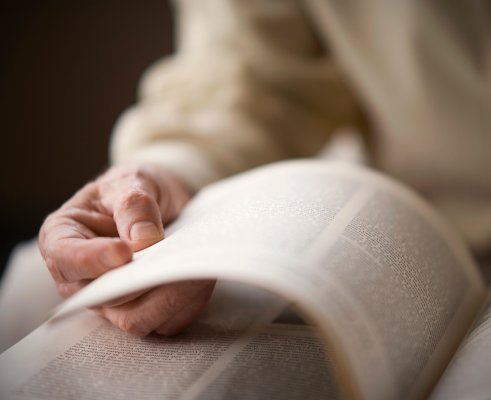 Study Finds Americans Don't Read Much
Next Up: Editor's Pick