LeBron James, #6 of the Miami Heat, looks on during action against the Detroit Pistons at AmericanAirlines Arena in Miami on February 3, 2014.
Marc Serota—Getty Images
By Eliana Dockterman

LeBron James will become an unrestricted free agent, according to reports Tuesday, just days after the Miami Heat fell short in the NBA Finals.

Agent Richie Paul told the Heat that James, a four-time league MVP, is opting out of his contract with the team, ESPN reports. James’ decision comes after a disappointing performance by the Heat against the San Antonio Spurs, who soundly dispatched the Heat in five games. The Heat have won two championships since James left the Cleveland Cavaliers for Miami in 2010.

James opting out of his contract doesn’t necessarily mean he is leaving Miami. He still has until June 30 to decide whether he wants to remain with the Heat for the final two years of his contract. He would make $20 million next season alone under the current contract. And if he ultimately does opt out, he could still sign a new contract with the Heat.

James’ decision will likely overshadow that of fellow NBA all-star Carmelo Anthony, who announced earlier this week that he will opt out of his contract with the New York Knicks. Analysts have speculated that Anthony is entertaining offers from the Chicago Bulls, Houston Rockets, Dallas Mavericks and Los Angeles Lakers. But these teams may now race to make space for James. 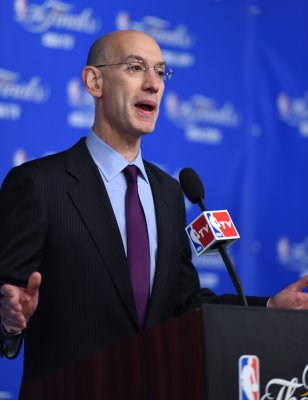 NBA Moves Logo to Backs of Jerseys, a Potential Precursor to Uniform Ads
Next Up: Editor's Pick