12 Breakup Videos Better Than 'Get Her Back' by Robin Thicke

Today, Robin Thicke released a truly depressing video about his breakup with Paula Patton involving text messages supposedly exchanged between the couple. But though “Get Her Back” may be the newest breakup music video to bum you out, it’s far from the best.

So whether you’re going through a breakup or just love some JT and T-Swift, here is TIME’s roundup of the best breakup music videos:

“Cry Me a River” by Justin Timberlake

In this classic of the 2000s, Justin Timberlake breaks into what I assume is Britney Spears’ house, spies on someone who looks an awful lot like Britney and sleeps with someone else in her bed. Amazing.

Breakup truism: “Your bridges were burned, and now it’s your turn to cry.”

“We Are Never Getting Back Together” by Taylor Swift

The queen of breakups, Taylor Swift, obviously makes the list. This is probably her most upbeat breakup song: it does involve woodland creatures after all.

Breakup truism: “We hadn’t seen each other in a month, when you said you needed space. What?”

“To the left, to the left” is so catchy! Packing boxes never felt so empowering. Note all the times she mentions how she bought all the stuff they share. Yes you did, Bey!

Breakup truism: “I can have another you in a minute. Matter fact, he’ll be here in a minute, baby.”

Poor Kanye. Despite being an international superstar, he didn’t seem to have a lot of luck in love. He lets it all out in “Heartless.” But don’t worry. It has a happy ending: Kanye West finds Kim Kardashian.

Breakup truism: “I decided we weren’t going to speak, so why are we up 3 am on the phone? What she be so mad at me for? Homie, I don’t know she’s hot and cold.”

“Since You Been Gone” by Kelly Clarkson

Kelly Clarkson has established herself as an essential part of any breakup routine. You’ll never feel so happy to be with your ex as when you’re screaming, “Since you’ve been gone, I can breathe for the first time.”

Breakup truism: “You had your chance, you blew it.”

When you’re doing the breaking up, it can be really hard. Especially if your partner is controlling you with strings like a puppet. Next time you’re struggling with how to end things, take a note from N Sync: “Don’t really want to make it tough, I just want to tell you that I’ve had enough.”

Breakup truism: “I don’t want to be your fool in this game for two.”

“So What” by Pink

Forget awkward lookalikes (the girl in that Robin Thicke music video doesn’t even really look like Patton). Pink’s husband, Carey Hart, actually starred in this video alongside Pink as she sings about the two of them being done. Maybe that’s why the two reunited in 2009.

Nobody can really tap into your soul like Usher at his peak. Out with someone else, and you’re still thinking about her? Call her constantly? Standing in the rain in front of her trailer? Usher knows your pain.

Breakup truism: “Nobody wants to be alone.”

“Rolling in the Deep” by Adele

Nothing fancy here. Just Adele sitting in a chair in an empty house belting out “Rolling in the Deep.” Oh and someone dancing in what looks to be a bunch of dust? Sometimes you don’t need much more than an amazing voice singing about pain.

Breakup truism: “The scars of your love, they leave me breathless. I can’t help feeling we could have had it all.”

“You Oughta Know” by Alanis Morissette

There’s nothing worse than seeing your ex with someone new. You may feel the urge to remind them of how much they hurt you, how messy your breakup was. Alanis Morissette does so in hair-flinging fashion in this very 90s video.

Breakup truism: “Every time you speak her name, does she know you told me you’d hold me until you died?”

“We Belong Together” by Mariah Carey

Okay maybe this will make you more nostalgic for your ex than help you get over the relationship. It may even encourage you to run away from your wedding to the wrong person. But sometimes people are meant to be together, right?

Breakup truism: “I never should’ve let you go. I didn’t know nothing; I was stupid; I was foolish; I was lying to myself.”

Whoever thought they should put Destiny’s Child on a deserted island, dress them in fatigues and have them and dance in front of an ancient temple was a genius. These girls made girl power mainstream.

And now what you know what a real breakup video looks like, check out the Robin Thicke version: 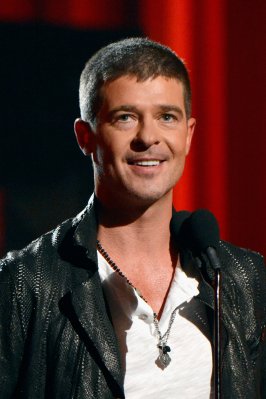 Robin Thicke Tries to 'Get Her Back' in New Video About Estranged Wife
Next Up: Editor's Pick