After a brief respite in 2012, music sales are once again on the decline. A new report by the International Federation of the Phonographic Industry shows that recorded music revenues slipped 3.9 percent last year to $15 billion globally.

A precipitous fall in revenue in Japan is mostly to blame. The country is the second-largest market for recorded music in the world, but sales fell by a huge 16.7 percent there in 2013 because of a decline in both physical music sales and older digital products such as ringtones. Taking Japan out of the equation, global music sales were nearly flat year-over-year, dipping by 0.1 percent from 2012 to 2013.

The biggest growth sector in the industry was once again in subscription services such as Spotify and Rdio. As the number of paying subscribers rose from 20 million to 28 million from 2012 to 2013, revenue from such platforms grew by 51 percent and topped $1 billion for the first time. Revenue from ad-supported streaming services like YouTube and the free version of Spotify also grew by more than 17 percent. In total more than a quarter of the industry’s $5.9 billion in digital revenues now comes from these free and subscription-based streaming options.

Physical music sales continued drive the majority of revenue for the industry, but likely for the last time. Physical formats comprised 51 percent of music sales last year, down from 56 percent in 2012. The rise of digital is expected to continue unabated for the foreseeable future.

The mixed data from the report cast 2013 as “a year of good news and bad news,” Universal Music Group International CEO Max Hole told Billboard. Another yearly decline—the 13th in the last 14 years—is not the step the industry wants to take as it tries to claw its way back to the heyday of the ‘90s, when global industry revenue was close to $30 billion. But executives are confident that people will one day pay for music subscription services en masse. The international CEO of Sony Music Entertainment told Billboard he expects 100 million people to sign up for music streaming services “in the near future.” The question is whether streaming will be able to rise fast enough to make up for ongoing declines in physical sales and, more recently, digital downloads. The IFPI report noted that digital download revenue dropped 2 percent last year.

On the album front, One Direction’s Midnight Memories took the 2013 crown, selling 4 million units globally. Eminem’s Marshall Mathers LP 2 followed with 3.8 million in sales, and Justin Timberlake’s The 20/20 Experience rounded out the top three with sales of 3.6 million. Beyonce’s self-titled album, a surprise December release that was only available on iTunes its first week, even snuck into the bottom of the top 10 with 2.3 million units sold. 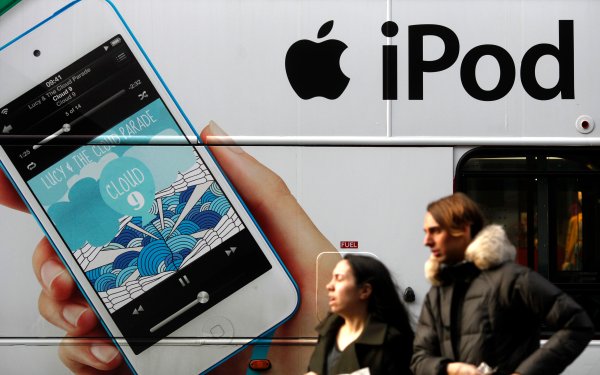 Apple Wants to Stop New Music From Hitting Spotify
Next Up: Editor's Pick