How the U.S. and Germany Could Hack the World Cup

Jermaine Jones of the USA scores the 1-1 goal.
Mast Irham—EPA
By Bill Saporito

It is a measure of just how much the U.S. has grown as a soccer nation that a last-gasp goal by Portugal, one of Europe’s perennial powers, to earn a 2-2 draw is being viewed as a devastating loss. Going into that game, most U.S. soccer strategists would have been thrilled to come away with a point against a team fronted by Cristiano Ronaldo, arguably the world’s best player.

The now disappointing draw with Portugal means that a draw would be a delightful outcome for both sides in the U.S. game against Germany this Thursday—and a feast for conspiracy fans, oddsmakers, and app makers. The World Cup can be hacked, because a point each would make Germany the Group G winner and the U.S. the runner-up, and each team would advance to the second round.

So it’s simple, right? The U.S. and Germany should have a kickabout on Thursday and waltz into the finals, an outcome made easier because U.S. coach Jürgen Klinsmann and German coach Joachim Loew are friends and former colleagues. A draw between Ghana and Portugal, who play at the same time, would produce a similar result, but there’s no controlling that outcome. (That said, some officials from Ghana’s football federation have been implicated in trying to arrange fixed friendly matches. On the field, Ghana’s players have been nothing short of terrific.)

An agreement? A fix? Couldn’t be, won’t be done, says Klinsmann. His boys are playing for keeps—they’re American, aren’t they—“we will give everything to beat Germany. That is our goal,” he said. On the field, though, life just doesn’t work that way, whatever the players’ good intentions. If this game is level in the second half, it’s only natural that the players on both sides will want to take fewer risks. Better to not win then to lose and go home. No one wants to be the guy who ruins the World Cup for his team.

In the somewhat sordid history of the World Cup, agreements to fix matches or manipulate them are not unheard of. In fact, West Germany was involved in one of the most famous incidents: In 1982, West Germany needed to beat Austria by a 1-0 score to qualify for the second round, a score that worked perfectly for Austria’s advancement, too. The infamous “Great Gijon Swindle” as it is sometimes known (the Cup was staged in Spain that year) saw Germany go up a goal early and then the lads had a nice rest for the duration of the game. The victim was an Algerian team that had played well and deserved better.

The third group games of the World Cup are always a swirl of possibilities. Brazil had a 1% chance to get knocked out; Iran a 15% chance to advance. The U.S. can advance even if it loses and Portugal or Ghana wins. The outcome depends on a series of tiebreakers, the first being goal differential: goals scored minus goals allowed. In this scenario, Ghana can advance with the same record as the U.S., despite having been beaten by the Americans.

That last bit—the fact that a team you beat earlier could advance in a tiebreaker—says all you need to know about FIFA’s tournament management skills. The idea of the U.S. and Germany cooking up common cause is indeed unsporting if not downright un-American. But on FIFA’s distorted planet football, it makes all the sense in the world. 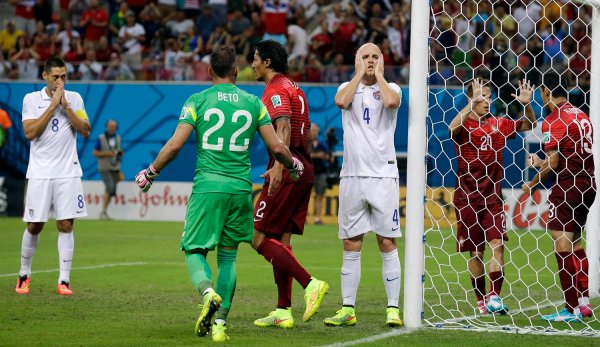 No Regrets For Michael Bradley
Next Up: Editor's Pick