Prior to the debut of this year’s World Cup, Germany was not only a favorite to win the tournament, but was voted the most popular country in the world. But while Deutschland still has a loose cup chance, its popularity may be waning after a few controversies that have seen the country’s Nazi past reemerge—and which throw an unwelcome spotlight on the country’s present, albeit isolated, neo-Nazism.

Nazi-era jersey
An exhibit of historical soccer jerseys in Salvador, Brazil has flared into controversy because of its inclusion of a 1934 German replica uniform. The white garment with a reichsadler, or imperial eagle, perched on a swastika has many wondering who could have made such an insensitive oversight. While looking at the 1934 regalia, Rolf Zettel of Fribourg, Switzerland told the Associated Press: “Is this a joke or what? Germany 1934 [was] a despicable time. Is this OK? No it’s not OK.”

Others, however, say it should remain for historical purposes. Chile fan Leonardo Duarte said, “It actually represents a time that I don’t know that well, but that was really negative in world history.”

Germany’s recent record on blackface isn’t good. Die Tageszeitung, a left-leaning newspaper known for its progressiveness and work on inequality, referred to the White House as “Uncle Barack’s Cabin” in 2008. Editors defended the cover, saying it was satirical.

In 2011, Martin Sonneborn, a print satirist, comedian and current member of European Parliament lathered himself in blackface in order to compare himself to Obama.

The satyrical "Die Partei" (The Party) party featuring candidate Martin Sonneborn made to look like US President Barack Obama, in Berlin September 16, 2011, ahead of regional elections.
John MacDougall/Getty Images

The backlash in English-speaking media was ferocious, but Sonneborn was unapologetic. “No, I didn’t know [the history of blackface],” he said. “If Americans associate it with that, then I’m sorry, but I’m not going to take it down,” Sonneborn told The Local at the time.

Also during the match between Ghana and Germany, a man covered in Nazi markings—including an “HH” for “Heil HItler”—invaded the field, and evaded stewards. It fell to Ghanaian midfielder Sulley Muntari to remove him.

Ghana's Sulley Muntari helps a spectator off the field during the 2014 World Cup soccer match between Germany and Ghana on June 21, 2014.
Eddie Keogh/Reuters

According to Football Against Racism in Europe director Piara Powar “The question becomes how does one control an individual fan who chooses to mark his body and jumps on the pitch to propagate his neo-Nazi views.” He added: ”It’s a failure in the FIFA system to get as far as he did.” 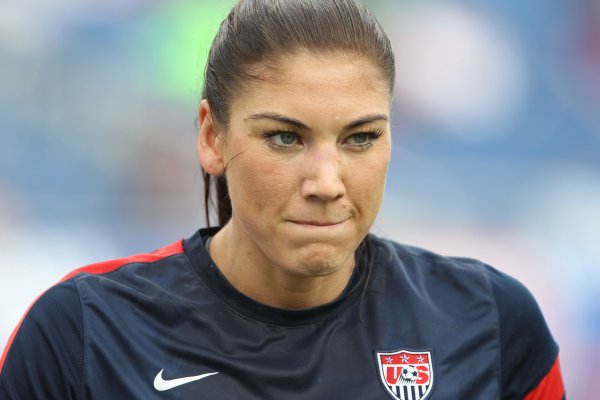