Fighters of the Islamic State of Iraq and the Levant (ISIL) celebrate on vehicles taken from Iraqi security forces, at a street in city of Mosul, June 12, 2014.
© STRINGER Iraq / Reuters—REUTERS
By Nash Jenkins

A startling number of Australian citizens and residents have left the country to join jihadist factions in the ongoing crises in the Middle East, prompting the Australian government to launch a statewide effort to crack down on “home-grown terrorism” fostered within its borders.

“This is one of the most disturbing developments in our domestic security in quite some time,” Australian Foreign Affairs Minister Julie Bishop told the Australian Broadcasting Service. “There’s a real danger that these extremists also come back home as trained terrorists and pose a threat to our security.”

Authorities believe that around 150 Australians are currently fighting alongside ISIS in Iraq and Syria, making the country the highest foreign per capita contributor to the violence. Many more have left the country for the Middle East in recent weeks, though their intent in doing so has not yet been determined.

Abbott’s government has thus far canceled a number of passports held by those Australians who have joined the conflict, and is working to fortify a border security system that has a history of being more permeable than desired. It was a “customs failure” last year that permitted convicted terrorist Khaled Sharrouf to escape the country with his brother’s passport and head to Syria and then Iraq, where he has had a hand in the recent mass executions of Iraqi soldiers.

As for the suspected or confirmed terrorists still at large within the Australian borders, the government has mulled over the idea of providing national intelligence agencies greater access to the country’s internet traffic — a potentially controversial move, considering the outcry over the government’s mobile data surveillance plan in 2012.

This is not the first time that Australia has taken note of the extremist diaspora out of the country. Last summer, TIME reported that over 200 Australians had joined militant groups fighting to unseat Syrian President Bashar Assad in the country’s ongoing civil war, and that Australian counterterrorism operatives had consequently begun collecting evidence against suspected combatants.

Still, the exodus persists, from Australia and elsewhere: the Economist reported earlier this month that as many as 3,000 foreigners may have joined ISIS forces. The organization and its satellite groups seem intent on making their chaos an international issue, actively soliciting support from Muslims across the world.

In a 13-minute propagandist recruitment video released last week, purported ISIS extremists stated that their fellow jihadists in Iraq and Syria hailed from countries as far afield as Bangladesh and even Cambodia, although some Cambodian officials have disputed the claim. 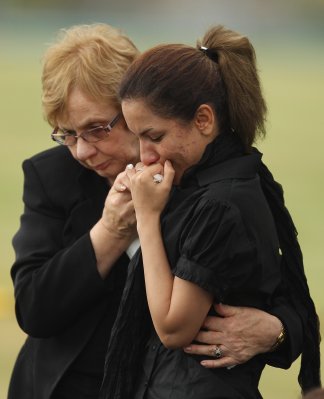 Families of Asylum Seekers Who Died in a Shipwreck Are Suing Australia
Next Up: Editor's Pick