Thai policemen arrest a student for reading George Orwell's 1984 at a shopping mall in Bangkok on June 22, 2014
Pornchai Kittiwongsakul—AFP/Getty Images
By Charlie Campbell

Planning for Thailand’s latest military coup began four years ago, according to the leader of antigovernment demonstrations that paralyzed Bangkok for six months and contributed to the ousting of Prime Minister Yingluck Shinawatra.

Suthep Thaugsuban, the firebrand chief of the People’s Democratic Reform Committee (PDRC) — the main Yellow Shirt protest group — revealed to a fundraising dinner over the weekend that he and Thai Army chief Prayuth Chan-ocha had been discussing how to purge Thailand of the influence of powerful Shinawatra ever since deadly political violence erupted in 2010.

The Bangkok Post quoted Suthep as saying, “Before martial law was declared [on May 20], General Prayuth told me ‘Khun Suthep and your masses of PDRC supporters are too exhausted. It’s now the duty of the army to take over the task.’”

Suthep is a former Deputy Prime Minister for the Establishment-backed Democrat Party. The 64-year-old has murder charges pending relating to a crackdown on pro-Thaksin Red Shirt protesters he ordered in 2010 that claimed at least 90 lives and left more than 2,000 injured, and he is seen as being closely aligned with elite institutions such as the military, judiciary and royal court. However, he now claims that he will retire from politics and that the PDRC “will function like a nongovernmental organization that will carry out research.”

The crackdown on opposition to the May 22 coup continues. On Sunday, eight people were arrested outside the capital’s Siam Paragon mall — one for reading George Orwell’s dystopian classic 1984, copies of which have become symbols of the protest movement. Others were arrested for holding sandwiches, which have also become a tongue-in-cheek pro-democracy prop.

The Tourism Authority of Thailand has not responded to requests for clarification from TIME regarding whether foreign visitors should refrain from bringing 1984 into the country.

Meanwhile, eminent American linguist and political commentator Noam Chomsky has expressed support for dissident Pavin Chachavalpongpun, an associate professor at Kyoto University’s Center for Southeast Asian Studies. Like other prominent Thai critics of the coup living overseas, Pavin is wanted by the regime and has been threatened with two years in prison if he does not surrender.

“I am deeply disturbed to learn about the threats against Professor Pavin Chachavalpongpun,” said Chomksy. “I hope that they will be quickly withdrawn, as they should be, and that he will be free to visit his family and resume his life without government repression.” 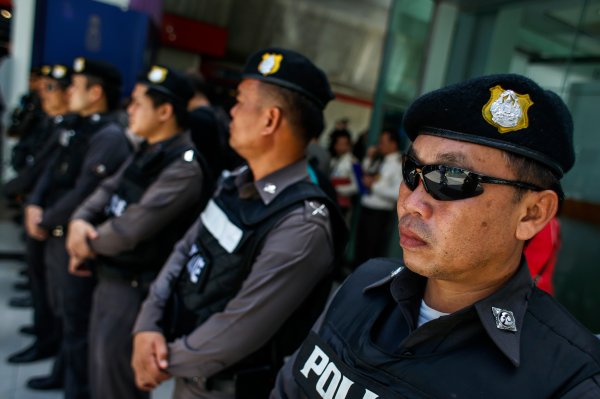 Fears Grow For Missing Thai Activist
Next Up: Editor's Pick