Hong Kong Holds an Unofficial Vote, and Beijing Is Definitely Not Amused

A volunteer, center, handles a voter's ID card at a polling station in Hong Kong on June 22, 2014. Hong Kong citizens cast their ballots in an unofficial referendum on democratic reform, as booths opened across the territory in a poll that has enraged Beijing and drawn more than 690,000 votes since it opened online
Philippe Lopez—AFP/Getty Images
By Emily Rauhala

More than 690,000 Hong Kong people voted this weekend. There were no candidates, platforms or promises. Local authorities will not recognize the results. Beijing dismissed it as a farce. And yet they voted still — in a de facto referendum on democratic reform, conducted on Chinese territory.

More votes will come. The weekend was merely the start of an informal, civil-society-backed exercise designed to gauge support for electoral change. Until June 30, Hong Kong people can vote, in person or online, on three possible ways to elect the city’s leader, known the Chief Executive, who is currently chosen by a 1,200-member electoral college dominated by establishment conservatives. All three proposals give the public the right to nominate candidates. But Beijing and the Hong Kong government insist that this would go against Hong Kong’s miniconstitution — the Basic Law — which says candidates for the 2017 direct election have to be vetted by a nomination committee. They also have to “love China,” Beijing says.

A former British colony that was returned to Chinese rule in 1997, Hong Kong operates semiautonomously, enjoying a range of rights but beholden, in many ways, to Beijing. It is governed under a model known as “one country, two systems.” But critics of the arrangement worry that the two systems — Hong Kong’s freebooting capitalism, governed by common law, and China’s one-party state-run version — are slowly merging into one, tilting the balance in Beijing’s favor.

It’s a question that consumes the territory, dividing it between those who welcome China’s influence (or who say that there is no practical choice other than to accept it) and others who vehemently oppose it. The resulting is a deeply polarized territory. Most people are somewhere in-between, seeing some level of integration as inevitable, but willing to fight to protect the freedoms they hold dear — the right to assemble, an independent judiciary, free speech and a relatively free media.

Divisions exist not only among Hong Kongers but also between Hong Kong and the mainland, from which many in Hong Kong consider themselves culturally distinct. In 2012, plans to introduce “national education” to local classrooms provoked a backlash against what many parents and students called brainwashing; the government backed down. Every year, in another sign of a Hong Kong spirit distinct from the People’s Republic of China, tens of thousands attend the city’s annual Tiananmen Square vigil — the only such event on Chinese soil.

Beijing alternates between actively discouraging, and haughtily dismissing, dissent. It chose to do the latter with this weekend’s vote. The English edition of Global Times, a strident state media organization, downplayed the plebiscite’s significance, saying the use of online polls amounted to “mincing ludicrousness [sic].” Its editorial added: “The opposition groups and their overseas supporters have overestimated the effect of an illegal farce. Neither China’s central government nor the Hong Kong government will admit the results of the poll.”

Organizers of the Hong Kong poll initially said they hoped to attract 100,000-odd voters. Just before the online system went live, it was hit with an unusually sophisticated cyberattack. Although it is still unclear who is to blame, that attack, plus a previous cyberhit on a Hong Kong newspaper that supports the movement, is credited by some for the surge of interest in the plebiscite — both in Hong Kong and on the Chinese mainland.

Indeed, the Hong Kong vote quickly became one of the most talked-about stories on Chinese-language social media, spurring a raucous and at times funny debate about the vote, China’s response and the appropriate role of the Chinese Communist Party in Hong Kong. The Chinese edition of Global Times ran a piece headlined, roughly, “No matter how many people voted in the illegal Hong Kong election, it is not as many at 1.3 billion people.” One quick-witted social-media retort: “Global Times is going to give 1.3 billion people right to vote? That’s awesome news.” 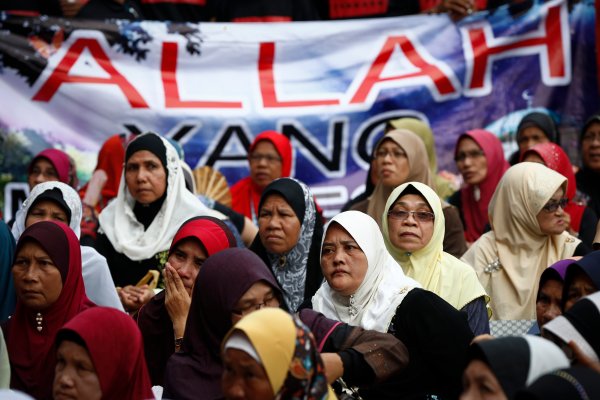