John Kerry Arrives in Egypt for Talks With New Leaders

Secretary of State John Kerry arrived in Egypt Sunday to meet with the country’s newly elected leadership and to discuss the country’s political transition, its climate for dissent, its imprisonment of activists and journalists, Egypt’s national security and other issues.

While in Cairo, Kerry is meeting with President Abdul Fattah al-Sisi, who was sworn in earlier this month; Foreign Minister Sameh Shukri; and the head of the Arab League, Nabil Elaraby, according to the State Department. Kerry’s visit follows President Barack Obama’s congratulatory call to al-Sisi earlier this month, which reaffirmed the U.S.’s commitment to working with Egypt as it tries to strengthen its democracy.

“There’s a strong desire on the part of the United States for this transition to succeed,” said a senior State Department official about the visit. “Egypt is a strategic partner and we have a long-standing relationship with Egypt. It’s a partnership that’s based on shared interest, strategic interest.”

Relations between the two countries had been strained after al-Sisi, then a military commander, led the coup last July to remove Mohamed Morsi, Egypt’s first democratically elected head of state and a member of the Islamist group Muslim Brotherhood, from power just one year after he assumed office. Morsi has since been imprisoned, alongside scores of other Muslim Brotherhood leaders and members.

The U.S. suspended $1.3 billion in yearly military aid to Egypt following the coup, but the State Department said $575 million has been released during the past 10 days to pay defense contracts.

The State Department official also commended some signs of change in Egypt, such as al-Sisi’s call to revise the country’s human-rights law and steps taken toward reducing sexual violence against women in Egypt.

Kerry’s visit is part of a broader tour of the Middle East and Europe. 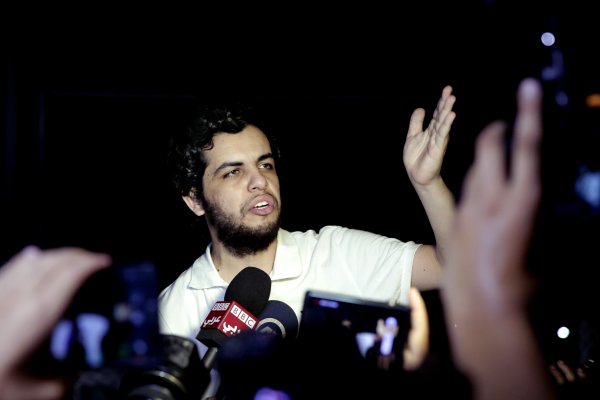 Al-Jazeera Reporter in Egypt Freed After Hunger Strike
Next Up: Editor's Pick