Graduates stand for the anthem "Lift Every Voice and Sing" during 2014 commencement ceremonies at Howard University in Washington May 10, 2014.
Jonathan Ernst—Reuters
By Sarah Butrymowicz

When junior Brandon Kirby brought home an award from a national biomedical conference, it was a nice boost for his small college in a dying coal town in the heart of Appalachia.

It also seemed incongruous, given that the conference was for minorities, the college is historically black — and Kirby is white.

So are 82 percent of the students at West Virginia’s Bluefield State College, which nonetheless qualifies for a share of the more than a quarter of a billion dollars a year in special funding the federal government set aside for historically black colleges and universities in 2011, the last year for which figures are available. These schools, known as HBCUs, can also apply for federal loans through the Historically Black College and University Capital Financing Program. Last year, they got $303 million from that program, on top of $1.1 billion in previously approved loans.

The HBCU designation was created by Congress in 1965 to refer to any accredited school “established prior to 1964, whose principal mission was, and is, the education of black Americans.”

HBCU’s have always enrolled students of all races, but they are increasingly becoming less black. At some, like Bluefield, blacks now comprise less than half of the student body. At Lincoln University in Missouri, African-Americans account for 40 percent of enrollment while at Alabama’s Gadsden State Community College, 71 percent of the students are white and just 21 percent are black. The enrollment at St. Philip’s College in Texas is half Hispanic and 13 percent black, according to 2011 enrollment data from the U.S. Department of Education. Nationwide, an average of one in four HBCU students is a different race than the one the school was intended to serve, according to research conducted at the University of Pennsylvania’s Graduate School of Education.

Many HBCUs were started under segregation to provide African-Americans with higher education opportunities. After integration, they became seen as places for black students to overcome economic and educational inequities. Indeed, HBCUs have been instrumental in developing the black middle class, graduating substantial numbers of teachers, engineers and other professionals. But as schools that had been predominantly white opened their doors to other races, black students became scarcer at historically black colleges. To survive, the universities have had to market themselves to all students.

But George Cooper, the executive director of the White House Initiative on HBCUs, says such wild demographic swings are a testament to the modern-day flexibility of HBCUs. These schools still are, and always will be, legally considered historically black, he said.

“The definition is a federal definition,” Cooper says. “They’re living up to it.”

Congress has never stipulated whether an institution could continue to be considered historically black if it became mostly white. The legislation that gives the schools their largest pool of money says only that they have “contributed significantly to the effort to attain equal opportunity through postsecondary education for black, low-income, and educationally disadvantaged Americans.”

Not everyone agrees. Economist Richard Vedder favors eliminating special funding for HBCU’s on the grounds that all schools should receive money based on present realities, not historic mission. “If you’re going to give subsidies for institutions, you shouldn’t give it on the basis of some sort of historical [legacy],” says Vedder, director of the Center for College Affordability and Productivity.

At Bluefield, officials and students contend they haven’t strayed from their original mission for the same reason Kirby and his classmates are allowed to participate in the biomedical conference.

“We’re all considered minorities because we’re in a poverty state,” Kirby says, referring to West Virginia.

The university primarily draws rural students from Appalachia, many of them low income and the first in their families to attend college. “The students that we serve would not necessarily have other options for higher education,” Bluefield State President Marsha Krotseng says.

The schools, and many experts, are quick to point out that public HBCUs are often underfunded by their states. Even with the extra money they receive from the federal government, they argue, the schools get less than 3 percent of federal higher-education funding — slightly less than the proportion of students they enroll.

They also say there remains a need for historically black schools: to serve disadvantaged students of any color. Many of them are actively courting low-income students of all races. Their goal, they say, is unchanged: to help those who have few other college options.

HBCUs “are there to provide opportunity and avenues for education for people who were disenfranchised,” says Michael Sorrell, president of Paul Quinn College, an HBCU in Dallas. “Slavery has been over for a long time, so you can’t have such a narrow view point on this.”

Anthony Bradley, a professor at The King’s College in New York City who has written about HBCUs, disagrees. He says that broadly targeting disadvantaged students isn’t enough to merit continued special funding from the federal government, since many other colleges and universities also do this.

“That doesn’t set them apart from community colleges,” Bradley says. “Most colleges in the country have special programs to recruit and matriculate and graduate disadvantaged students.”

On a practical level, the increasing diversity of HBCUs has resulted from a need to fill seats to survive. Before desegregation, more than three-quarters of black college graduates went to HBCUs. Today, less than one-sixth of college-going blacks do, according to research by the Ford Foundation. (The Ford Foundation is a financial supporter of The Hechinger Report.)

These institutions, in general, are also having trouble attracting students because of financial problems, low graduation rates, and other poor outcomes, and their enrollment is shifting along with broader changes in the demographics of incoming college students. The number of Hispanics and Asians in particular at HBCUs is climbing. Asian enrollment rose 60 percent from 2001 to 2011, and Asians now comprise about 1 percent of HBCU students, according to the University of Pennsylvania research. Hispanics make up about 3 percent.

“The reality is that if HBCUs — with the exception of maybe the top five or six — do not diversify, they’re all going to die,” says Bradley. “While they may continue in their mission in respect to providing opportunities to African-Americans on paper, in reality they’re simply going to have to become more like any university in the country.”

That’s what happened at Bluefield State. The transformation began in the 1960s, when falling racial barriers meant blacks could attend any university or college, and the school recruited returning Korean War veterans just to stay open.

In 1968, after a student set off a bomb on campus, the state closed the dorms. That turned Bluefield State into a commuter campus in a predominantly white area, which grew even whiter when the coal industry left town.

By the mid 1990s, black enrollment had dipped to about 6 percent, and there were no black faculty.

One alumnus, William White, who graduated from the school in 1968, said returning to the campus in the 1990s, when it had become overwhelmingly white, was “the worst feeling I’ve ever had in my life.” Even so, he thinks the definition of HBCU should be flexible. It is possible for an HBCU to be minority black, he says, and the schools should “educate anybody that comes through their doors.”

This story was produced by The Hechinger Report, a nonprofit, nonpartisan news outlet affiliated with Teachers College, Columbia University. 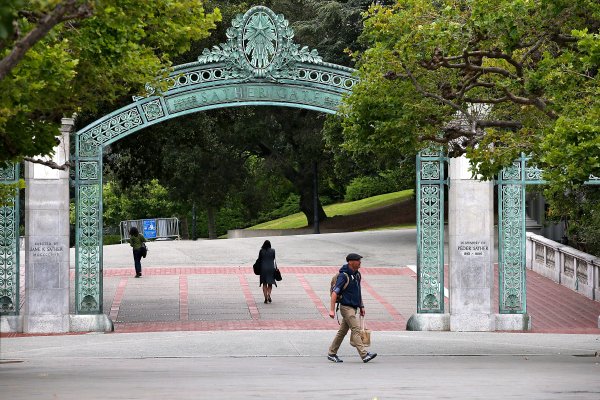 Cali Colleges Not Doing Enough to Combat Violence
Next Up: Editor's Pick