Obama in the Toilet at Conservative Conference

A urinal cake with President Barack Obama's likeness is seen in a urinal at the Faith & Freedom Coalition's "Road to Majority" event in Washington on June 20, 2014.
Zeke Miller for TIME
By Zeke J Miller

President Barack Obama made a cameo at a conservative conference in Washington on Friday—in the restroom.

The Faith and Freedom Coalition’s Road to Majority Conference, which draws some of the biggest conservative icons and presidential hopefuls looking to make inroads with the grassroots, was heavy on criticism of Obama’s domestic and foreign policy agenda. And small figurines of Obama’s head, first spotted by the Huffington Post‘s Igor Bobic, were placed inside the urinals in the mens’ restroom outside the conference hall where the likes of Kentucky Sen. Rand Paul and New Jersey Gov. Chris Christie were addressing a crowd of several hundred.

No one has yet claimed responsibility for the stunt. 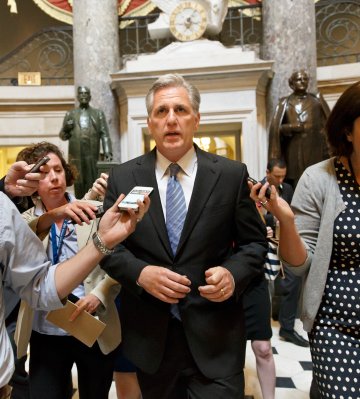 House Expects Business as Usual After Cantor Goes
Next Up: Editor's Pick