US Secretary of State John Kerry kicks around a soccer ball during an airplane refueling stop at Sal Island, Cape Verde, on May 5, 2014.
Saul Loeb—AFP/Getty Images
By Grant Wahl / Sports Illustrated

SÃO PAULO — For years, I have thought it would be beneficial for U.S. political leaders and diplomats to have a working knowledge of international soccer. What better way is there to break the ice with a foreign leader than to engage in water cooler talk about the latest news from the fútbol field?

Well, on Thursday I finally got the chance to talk about it with a U.S. diplomat, and it just so happened to be the chief American diplomat, Secretary of State John Kerry. One thing became clear: The guy knows his soccer. Here’s our conversation (edited lightly for length and clarity):

SI – Thanks for taking some time to talk World Cup and soccer. I know you have more important things going on.

Kerry: [laughs] Some people in the world would tell you there’s nothing more important, but that’s all right. It’s a pleasure to be with you, I hope I didn’t leave you hanging there too long.

Imports of Importance: The German influence on the U.S. World Cup team

SI: No, not at all. In fact, you allowed me to see the end of the Uruguay victory over England here in São Paulo.

Kerry: Oh, is that right? You see I haven’t been able to watch. I catch the tail end of these but you know…it’s very frustrating for me.

SI: I hear you. To start, I wanted to know: As the U.S.’s chief diplomat, you must have international soccer come up in conversations with foreign leaders. How often does that happen and do you have any good stories about it?

Kerry: Oh, it comes up all the time. During the World Cup, they’re all watching, they’re all engaged. I suppose if I went to Spain that might not be such a formal welcome. Leaders all over the world are up on it. When I’m in the Gulf Sates, in the Arab world, in South Asia, in Iraq, I mean, I’ve seen football fields, and I mean football/soccer pitches, in the strangest places in the world. Just pure dust. In Sudan there are these dirt pitches, kids out on the dirt playing as hard as if they were on a beautiful grass pitch and going at it and it’s just wonderful to watch. It’s universal. And the leaders bring it up frequently because they’re deeply invested, and some of the guys in that part of the world own some of the teams.

SI: I’ve always wondered, is there a benefit to someone in your position of being able to talk soccer a little bit as an icebreaker in those conversations with diplomats?

Kerry: You know, I think people love sports and sports is always an important part of diplomacy. You can go back to Ping-Pong Diplomacy with Nixon, you can go to the Globetrotters running around in basketball—sports is an integral part of life. There’s a lot of common ground because a lot of people in political life are often people who have enjoyed one sport or another and more importantly their countries are passionate about one sport or another, and it depends where you are.

Just last night I was at a New Zealand reception and the prime minister ended the speech talking about the Rugby World Championships and the incredible competition between Australia, New Zealand, some of the Pacific Islands and others. Everybody’s got a team they follow passionately. So it is a universal language in many ways. And it depends where you are and what sport it is, but almost everywhere soccer qualifies. And, I think it’s the global game, that and a couple of others maybe.

SI: I saw a photograph of you recently from somewhere in Africa. You were on a tarmac with a soccer ball. What was the story there? Where were you?

Kerry: I take a soccer ball with me in the plane, and when we have to refuel somewhere, when we refuel somewhere we’re kicking it around. I think it was Cape Verde. That’s probably where it was. I’ve seen some photos of us doing that in Austria, I think there was one in Germany. You know when we land to refuel coming back from the Middle East or when we’re going somewhere. If it’s daytime or even if it’s night sometimes and everybody’s awake, we go out and kick it around.

Kerry: We’ve had a couple of tarmac games. It’s a little rough if you fall.

SI: Will you be watching any of the U.S.’s games during the World Cup?

Kerry: Oh for sure. I’ve got to leave to go abroad, but I want to try to catch that match [on Sunday] because it would be a big deal if we can get by Portugal. That’s huge. And you know, injuries on both sides, so it’ll be a question. We’ll see what happens, but I hope to be able to see it. It’s an interesting mix that Klinsmann has put together. He’s a pretty savvy guy. Amazing player himself, and we’ll see what happens.

SI: Lastly, I just wanted to ask you about how the State Department uses soccer in its global outreach programs, if there are any specific things you guys do with it.

Kerry: We had Cobi Jones and Tiffany Roberts here at the State Department in our Sports Envoy Program in May, and we also had the World Cup [trophy] here. We had the Vice President come over here to the State Department. We did a big event in our auditorium, and we held some soccer clinics and had a bunch of kids in and promoted sports cooperation with government and folks and so forth. We have a specific program called the Sports for Community Emerging Leaders in Action Program, and we’re going to bring about 15 Brazilian male and female development professionals with American mentors in the Youth Development Sector.

When I was in Algeria a couple months ago, we did a big soccer thing. We went over to a Nike store and met with a bunch of kids where they have a soccer pitch. It’s a small, miniature pitch out in front of the store with small goals and everything. One of the professional players there was there and we had a big media thing with it. And we just talked about youth programs and the universality of sports. And so, you know, those are just a couple of examples of the kind of things we do. We send people abroad from one sport or another, we have different sports ambassadors. It is a language. When I went to Colombia, I played a seated wheelchair athlete, you know, volleyball match. A group of athletes were all arranged, as you would be normally, as you would be in any team, and played volleyball. It was fantastic.

It’s a way to communicate with people, one way or the other. Breaks down the barriers, proves commonality, takes away any of the sense of “We’re different” or “You’re different” and makes people the same with the same common passions. It’s a very strong language.

SI: Very cool. Well, I appreciate you taking the time and let’s see if the U.S. makes a run down here at the World Cup.

Kerry: We’re hoping, my friend. It would be really nice. Would be sweet to see. We’ll keep our fingers crossed. It’s the Death Bracket, I guess, right?

Kerry: And Germany looks pretty imposing, but, you know, they don’t have to worry about Germany to get out of the bracket, so that’s the key. 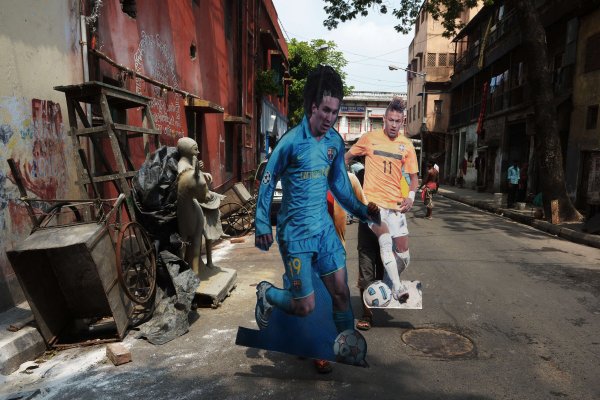 World Cup Gets Wacky
Next Up: Editor's Pick