Pope Francis listens to a speech during his meeting with Sephardi Chief Rabbi Yitzhak Yosef and Ashkenazi Chief Rabbi David Lau, at the Heichal Shlomo center in Jerusalem on May 26, 2014
Andrew Medichini—AP
By Elizabeth Dias

Pope Francis is not changing his mind about recreational drug use or marijuana legalization. On Friday morning, the Holy Father made his anti-pot position clear to the International Drug Enforcement Conference in Rome. “Let me state this in the clearest terms possible: the problem of drug use is not solved with drugs!” the Pope said. “Drug addiction is an evil, and with evil there can be no yielding or compromise.”

Legalization, he continued, should be a no-go. “Attempts, however limited, to legalize so-called ‘recreational drugs,’ are not only highly questionable from a legislative standpoint, but they fail to produce the desired effects,” he said.

It is far from a new position, either for Francis or the Vatican. In 2001, the Vatican’s Pontifical Council for Health Care urged governments to resist legalization even on soft drugs in the manual “Church, Drugs, and Drug Addiction,” published at the request of John Paul II. Francis said no to legalization as a bishop in Argentina when he was still Cardinal Jorge Bergoglio. Last summer, Pope Francis condemned legalization when he was in Rio de Janeiro for World Youth Day. “The scourge of drug trafficking, that favors violence and sows the seeds of suffering and death, requires of society as a whole an act of courage,” he told the crowd, adding that legalization would not yield “a reduction in the spread and influence of drug addiction.”

The Pope’s position is similar to the Dalai Lama’s, who also warns against recreational use. “These kinds of substances are generally considered poison, very bad,” he told TIME in February. “The ability to judge reality is something very unique. Our brain is something very special. So if that is damaged, that’s awful. So alcohol and drugs are very bad.”

Francis’ reasoning is not so much about drugs themselves as about the broader suffering they cause, not just for individuals, but also for communities. Drugs dependencies can both hurt relationships and trap people in poverty. “To say this ‘no,’ one has to say ‘yes’ to life, ‘yes’ to love, ‘yes’ to others, ‘yes’ to education, ‘yes’ to greater job opportunities,” the Pope explained. “If we say ‘yes’ to all these things, there will be no room for illicit drugs, for alcohol abuse, for other forms of addiction.”

He is particularly concerned about their impact on young people. “The scourge of drug use continues to spread inexorably, fed by a deplorable commerce which transcends national and continental borders,” he said. “As a result, the lives of more and more young people and adolescents are in danger.”

Even if his words are not new, it is still a significant stand for the first Pope from Latin America to take. The region has been at the forefront of the drug wars for years, and many lawmakers there have been arguing that legalization and regulation are actually the way out of the cycle of violence and poverty associated with the trade.

Last year Uruguay became the first country in the world to legalize the marijuana trade—growing, selling, smoking—to try to push traffickers out to the pot business, and President José “Pepe” Mujica was nominated for the Nobel Peace Prize. Argentina, Francis’ home, decriminalized possession of controlled substances in 2009, and Catholic priest Juan Carlos Molina, who serves as the country’s drug czar, called for a debate about whether or not Argentina should follow Uruguay’s example. In Brazil trafficking the drug is criminal but personal use is not punished. Mexico decriminalized small amounts of marijuana in 2009.

Francis may not have directly taken on these policies this morning, it is hard to imagine they are far from his mind, especially since South America is in the global spotlight for the World Cup games. The last major time he spoke out against recreational drugs was also when Rio de Janiero was an international focus for World Youth Day. It’s another reminder that the world’s top Catholic leader knows how to play the political game. 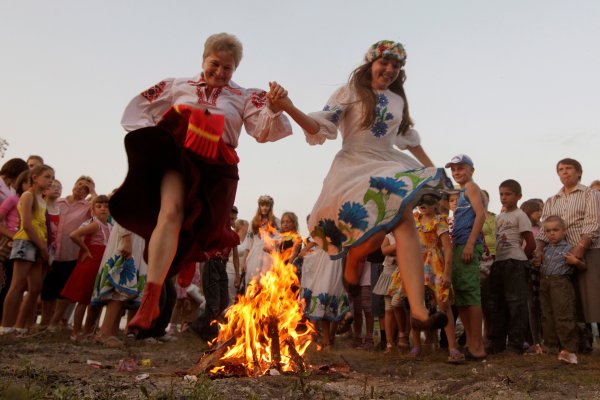 Summer Solstice Celebrations Around the World
Next Up: Editor's Pick