What you said about…

Re “Has Assad Won?” [June 9]: War is always a zero-sum game, isn’t it? Someone always has to win or lose. Perhaps the biggest loser, though, is the U.N. Security Council and its inability to pass any meaningful resolution or maybe the lack of moral justness by NATO to proactively intervene (unlike in Kosovo). The consistent repetitive failure of international political mechanisms to support those in most need proves that new voting methodology or a coherent doctrine of intervention is required to prevent such travesties from happening again.

Ghosts of Tiananmen Past

Re “Tiananmen: 25 Years Later” [June 9]: After 25 years,Western journalists are still persistently chasing the ghosts of Tiananmen. There is a long list of places and countries where killings are ongoing intentionally, remorselessly and unrelentingly. Why single out Beijing, again and again, after a quarter of a century?

Re “Don’t Forget Taiwan” [June 9]: Taiwan always keeps in mind: “Don’t put all your eggs in one basket.” In addition to bilateral trade negotiations,Taiwan must also take part in regional arrangements. The recent student movement shows that some of Taiwan’s young people are skeptical about the cross-strait relationship. However, we cannot ignore the fact that China is the world’s second largest economic entity and that it is also Taiwan’s largest trading partner. Taiwan’s government needs to maximize opportunities while minimizing risk.

The author describes China’s recent approach to Taiwan as a “hearts and minds” one, but it is just using carrots and sticks as the situation demands—and China has realized that it is the right time to use carrots now.

Taiwan is in a complex situation. While President Ma Ying-jeou has been more inclined to trade with China and build a stronger relationship, the opposition favors independence. Ma is walking a tightrope. He is trying his best. Yet without a tangible solution to the precarious political situation, he may have to surrender the presidency to the opposition in the next election.

Re “Ocean’s Dilemma” [June 9]: Living in a country rich in water, we are hardly ever confronted with the problems other countries are currently facing. We waste water while other places like California suffer from a severe crisis. We should keep in mind that we are all in the same boat. The only way to contain the expansion of scarcity is to minimize water consumption worldwide. Therefore, it is everybody’s responsibility to reduce the amount of our daily use of water to a minimum.

State of the Union

Re “Europe’s Right Turn” [June 9]: As a member of the Portuguese parliament, I was very much impressed by the courage to publish such blunt statements concerning the wrong path Europe is taking by supporting right-wing extremists. The E.U. has been built on the principles of solidarity, tolerance and justice for all. These anti-E.U. populists have defended precisely the opposite.Many of them have presented unacceptable racist mind-sets and have pushed for selfish nationalistic policies without caring for their neighboring countries. As a society, we need to do more to reconnect citizens with their elected officials so that together we can get back to building the E.U. our founding fathers dreamed of—a place of prosperity, peace and hope.

Charlotte Mcdonald-Gibson’s choice of words is wrong. Nigel Farage is not “Euroskeptic,” but avowedly and uncompromisingly anti-E.U. He wishes to see the disintegration of the E.U. because this entity is a corrupt, undemocratic failure. 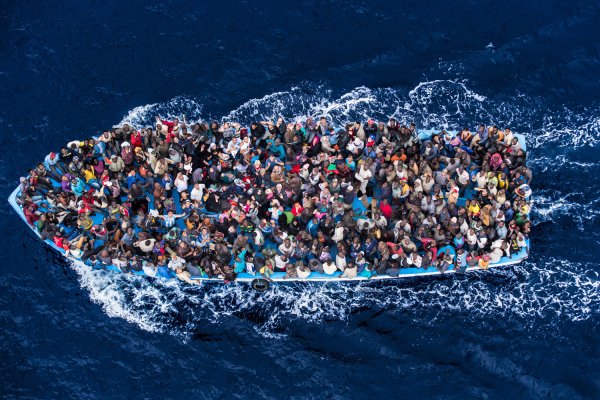 Boat Migrants Risk It All for New Life in Europe
Next Up: Editor's Pick