Before the ongoing conflict in Syria began in early 2011, Majed, 16, used to farm tomatoes in the fields near his hometown of Inkhil, Daraa, in the country’s southwest.

But when the Nusra Front, which has been labeled a terrorist group by the U.S. State Department, came to his town, he and other children as young as 12 years old started to spend time with members of the group in a local mosque, Majeb told Human Rights Watch.

“They would bring a car and go around to houses to pick up children. They taught children how to read the Quran, then taught us about weapon(s),” Majed said. “They taught us how to take apart and put together a weapon, they put up a target for us to practice shooting outside the mosque. Anyone who hit the target got a reward.”

Majed ended up fighting against government forces for three months. Another boy, Amr, 15, who fought with an extremist Islamist group in northern Syria, said his unit’s commanders encouraged children to volunteer for suicide bombing attacks. He reluctantly signed up, but he was able to get away before his turn came up, he told Human Rights Watch.

Majer and Amr are just two of many children who have been recruited as combatants by non-state armed groups involved in the Syrian conflict.

It’s not clear exactly how many child soldiers are fighting in Syria, but groups like the Islamic State of Iraq and Syria (ISIS), an al-Qaeda offshoot aligned with rebels fighting against forces aligned with Syrian President Bashar Assad, as well as the Nusra Front have encouraged boys as young as 15 to fight, at times recruiting them through free schooling campaigns, Human Rights Watch said in a report released Monday. While the report focused on use of child soldiers by rebel forces, the United Nations International Commission of Inquiry on Syria has documented the use of child soldiers by pro-government forces as well.

As Syria’s civil war is set to enter into its fourth year, human rights groups have been able to document that boys and girls were recruited to fight in battles, act as snipers, participate in suicide bombing missions, treat the wounded on battlefields and carry ammunition to and from the front lines. A Syria-monitoring group called the Violations Documenting Center documented 194 deaths of “non-civilian” male children in Syria from September 2011 until June of this year, for example.

In the video above, Zama Coursen-Neff, the Executive Director of Human Rights Watch’s Children’s Rights Division, said that armed opposition groups in Syria across the political spectrum are using children to fight.

“It’s bad enough that the Syrian government is dropping bombs on children, armed opposition groups in Syria should not in turn be sending children into harm’s way,” Coursen-Neff said.

Under international law, armed group leaders who recruit child soldiers can be tried as war criminals. The United Nations estimates that hundreds of thousands of boys and girls, some as young as 8 years old, are used as soldiers in numerous conflicts in Africa, Latin America and Asia. 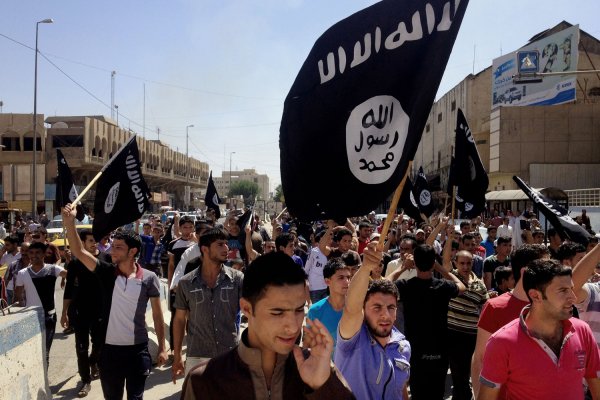 Syria Looks Across Border As Violence Engulfs Iraq
Next Up: Editor's Pick