There’s one thing not under dispute in the case of Wisconsin Gov. Scott Walker, who now lies in the political equivalent of critical condition after disclosure of his alleged involvement in a “criminal scheme” to evade campaign finance laws: On May 4, 2011, Walker wrote an email to Karl Rove, the former White House aide and Republican strategist.

In that email, Walker boasted about the abilities of one of his political consultants, R.J. Johnson. “R.J. helps keep in place a team that is wildly successful in Wisconsin. We are running 9 recall elections and it will be like 9 congressional markets in every market in the state,” Walker wrote.

The email matters because at the time Johnson was wearing a number of hats: He was a Walker advisor and a consultant to Walker’s own campaign, but he was also involved, sometimes with his wife, in other outside groups, like the Wisconsin Club For Growth and Citizens for a Strong America, which were supporting Walker. Another email obtained by prosecutors, which had been sent to Walker, described Johnson as having “coordinated spending through 12 different groups.”

From a distance, this looks bad. America’s campaign finance system is built upon a shaky assumption that there are two types of political spending: Spending controlled by candidates, which is heavily regulated, and spending that candidates do not control, which is far less regulated. In principle, the two pots of money must be kept separate, but in practice, those distinctions break down. Candidates intentionally send signals to direct the spending of outside groups, and donors make clear to candidates all they have given to help get them elected through third parties.

In the Walker case, there is an even further complicating factor: the meaning of what constitutes “political purposes” when it comes to coordination is contested. State prosecutors, according to their filings, have no doubt. They claim to have “established a concerted effort to circumvent Wisconsin’s campaign finance contribution prohibitions, limitations and disclosure requirements.” Under a state law allowing secret investigations, a state judge, who has since recused herself, issued subpoenas allowing the prosecutors to move forward with the case.

One federal judge, Ruldolph Randa, has since ruled that the coordination the prosecutors uncovered was not illegal since the outside groups only engaged in so-called issue advocacy—they did not expressly advocate Walker’s victory or defeat even though they clearly supported his efforts. Another state judge, Gregory Peterson, has made a similar ruling. But Peterson’s ruling is on appeal, leaving the law in doubt, and Randa’s ruling is now before a federal appeals court.

The same can be said for Walker, who will face reelection this fall, and is positioning himself for a 2016 presidential campaign. Elections, after all, rarely hinge on legal technicalities. They are about voter impressions, and “criminal scheme” is quite a phrase to overcome in a contested primary. Even if he skates criminal charges, he will now face the enormous task of explaining the byzantine technicalities of campaign finance law to the American public, which is predisposed, polls suggest, to believe that most candidates at all levels are bought and paid for by donors.

“This is nothing more than a partisan investigation with no basis in state law,” Walker said in a statement Thursday. “It’s time for the prosecutors to acknowledge both judge’s orders to end this investigation.”

The fate of the credibility of the nation’s campaign finance system is a different question altogether. The U.S. Supreme Court recently ruled that there is virtually no risk of corrupting lawmakers as long as money is delivered to outside groups supporting the lawmakers, and not the lawmakers themselves. As the emails make clear, Walker was quite proud and deeply involved in monitoring the money being spent on his behalf by outside groups. The money helped his cause, and was directed by a close aide. Will Americans choose to believe that politicians in his position cannot be influenced by the donors who paid the bills?

Correction: The original version of this story incorrectly described the nature of a federal appeals court ruling on a lawsuit seeking to block a state investigation into Scott Walker’s fundraising. It also incorrectly described the decisions by courts that have ruled on the issue of whether it is illegal for a candidate to coordinate with outside groups engaged only in issue advocacy. 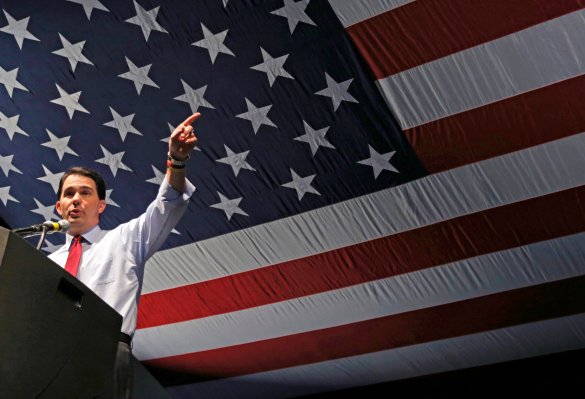 Wisconsin Gov. in Hot Seat
Next Up: Editor's Pick