The American auto industry nearly collapsed during the recession as car sales plummeted and companies struggled to stay afloat. Since then, U.S. car and light truck sales have steadily increased, reaching 1.6 million in May, up 11% from the year before.

Despite the general recovery, demand for some vehicles continues to underwhelm. According to figures from TrueCar, an auto industry information and technology platform, 15 models spent an average of at least 90 days on dealers’ lots before being sold. No car took longer to turn over than the Volvo S60, at an average of 155.5 days.

Days to turn is useful metric for gauging inventory levels, Eric Lyman, vice president of industry insights at TrueCar, explained in an interview with 24/7 Wall St. “The clock starts when the car lands at the dealership,” Lyman said. This levels the playing field, he added, because production facilities for various carmakers are located at different points across the U.S. or even in foreign countries.

According to Lyman, several factors may contribute to rising inventory levels. Some of these are temporary factors, such as the switch to a new model year. Because TrueCar data for 2014 covers cars in their 2014 model years, it makes sense that turnover rates are lower for models such as the GM’s (NYSE: GM) GMC Yukon, Chevrolet Tahoe, and Cadillac Escalade, all of which have released newly overhauled 2015 models.

In other cases, Lyman added, “high inventory is going to be [due] to a disconnect between the sales goals of the manufacturer and the retail demand for those units.” In some instances, manufacturers overestimate demand for their brands and ship too many units to their dealers. This results in high inventory and turnover levels for the brands.

Many of the brands that take the longest to sell are unpopular with customers, Lyman explained. Both Mitsubishi and Scion have car models that take the most days to turn. Both were also two of the nation’s lowest rated car brands, according to J.D. Power’s 2013 Automotive Performance, Execution and Layout Study, which measures brands’ appeal with car buyers.

Cars from Cadillac, Ford’s (NYSE: F) Lincoln, Jaguar and Volvo, all of which ranked in the bottom half of premium brands, according to the study, also made the list. Only one of the cars with the highest days to turn, the Chevrolet Tahoe, was manufactured by one of the survey’s 10 highest rated non-premium brands.

Although there are differences in how brands are perceived, Lyman added that disparities in actual quality among various brands is often relatively small. Five of the 10 cars requiring the most days to sell were made by brands with above-average scores on J.D. Power’s 2013 Initial Quality Study. Leading these brands was GMC, maker of the Yukon, which trailed only Porsche for fewest problems per 100 cars, according to the Survey. Only three models belonged to brands with scores considerably below the industry average, although one of these, Scion, was the lowest-rated brand in J.D. Power’s survey.

Based on figures provided by TrueCar, 24/7 Wall St. reviewed the car models with the highest number of days to turn. TrueCar turnover and sales data for each model reference a particular model year — figures for 2013 apply to cars in their 2013 model year, while figures for 2014 count data for 2014 model year vehicles. TrueCar also provided sales data for each of these models. Manufacturer’s suggested retail price (MSRP) data are from manufacturer’s website, and refer to the newest model year. We also relied on information from J.D. Power and Consumer Reports surveys, and the American Customer Satisfaction Index (ACSI). Safety data are from the National Highway Traffic Safety Administration (NHTSA) and the Insurance Institute for Highway Safety (IIHS). Sales figures are from The Wall Street Journal, as well as various company press releases.

These are the cars Americans don’t want to buy.

Jaguar has turned around in recent years following the 2008 acquisition by Tata Motors, and it has been an integral part of a rebounding United Kingdom automotive industry. Through May, U.S. Jaguar sales this year increased roughly 14.5% from last year. Sales of the XK, however, have barely changed over the last year. On average, it took dealers 102.7 days to turn a Jaguar XK, up from just 39.4 days in the first five months of 2013. A Jaguar XK carries a higher starting price tag of any car among the longest to turn, with an MSRP of $84,500. A convertible version of the XK starts at $90,500.

GMC ranked behind only Porsche in J.D. Power’s 2013 Initial Quality Survey. Consumers were also highly satisfied with GMC, awarding it a higher ACSI score than all but a handful of other brands. Last year, Consumer Reports ranked the Yukon as GMC’s most reliable car. Interestingly, while sales of the Yukon rose 42% year-over-year in the five months through May, the number of days to turn a Yukon rose from 62.4 in last year’s period to 112 this year. The Yukon is one of several General Motors’ full-size SUVs, alongside the Chevy Tahoe and Cadillac Escalade. Both the Tahoe and Escalade had among the longest turnover times in the in the U.S. through the first five months of 2014. Like some of its counterparts, figures for the Yukon may be impacted by the recent introduction of a newer model year.

The Cadillac Escalade is one of three full-size General Motors SUVs among the 10 cars with the longest days to turn, alongside Chevrolet’s Tahoe and GMC’s Yukon. It is also the slowest selling American manufactured car, taking an average of 115.5 days to turn in the first five months of 2014. This is up from 61.2 days to turn between January and May 2013, as sales have dropped 14.7% year-over-year. However, this may not necessarily be an issue of quality. General Motors recently released a new Escalade, which may affect sales and turnover for the 2014 model year. In fact, Cadillac was one of the top-ranked makes in J.D. Power’s 2014 Vehicle Dependability Study, behind only Lexus and Mercedes-Benz. Consumers were also happy with the brand, awarding it one of the industry’s highest ACSI scores.

The Mitsubishi Outlander took dealers an average of 117.1 days to turn so far this year. This was actually an improvement from last year, when it took dealers nearly 128 days to turn an Outlander. Sales of the Outlander have also been strong this year, up 37% in the first five months of 2014 versus the year before. Overall, sales of Mitsubishi cars rose nearly 34% in that time. However, the carmaker still holds just a 0.5% share of the U.S. car market. Mitsubishi’s model competes in a crowded field against some of the nation’s best selling cars, such as Toyota’s RAV4, Honda’s CR-V and Ford’s Escape.

Volvo’s S60 had the longest average days to turn of any car model sold in the U.S., taking an average of 155.5 days to turn in the first five months of 2014. This was more than twice as long as it took to turn an S60 last year. Sales of the S60 have slid as well, with just 1,777 sold this year through May, down 13% from the same period in 2013. So far this year, total Volvo sales are down roughly 10% nationwide. As a brand, Volvo has long been considered a carmaker in need of a turnaround. Ford sold it to Chinese carmaker Geely in 2010. The brand still maintains a reputation for safety, and the S60 earned a five star safety rating from the NHTSA and was an IIHS Top Safety Pick+ last year. 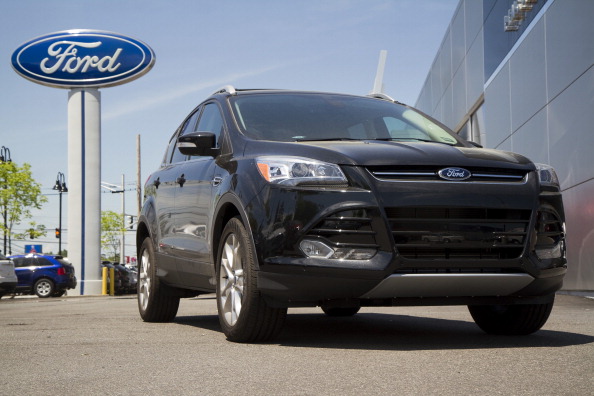 This Is the State With the Most Stolen SUVs
Next Up: Editor's Pick