Life in Mosul Gets Back to Normal, Even With ISIS in Control

Two weeks ago, Governor Atheel Nujeifi oversaw the city of Mosul and its surrounding province of 3.8 million people. Today, he’s holding meetings on the eighteenth floor of a luxury hotel in Erbil, some 50 miles away from Mosul.

His security detail sits at the end of the hall, his eyes locked on Nujeifi’s door, and a handgun tucked under his shirt.

“They have made maybe ten attempts on my life,” said Nujeifi, who left Mosul with his entourage of 20 armed guards when militants under the flag of the Islamic State of Iraq and Syria (ISIS) took the city on June 10.

The group now controls swathes of Syrian and Iraqi territory including two major Iraqi cities, Mosul and Tikrit, and have launched an offensive to take over the country’s largest oil refinery. Initially, hundreds of thousands of people fled Mosul, but within days many residents returned to the city to live under the rule of a group so radical even Al-Qaeda distanced itself from the fighters. And to many, it’s a distinct improvement.

“Do you know how it was in Mosul before ISIS came? We had bombings and assassinations almost everyday. Now we have security,” said Abu Sadr, who asked to be identified by a nickname, from his home in Mosul’s Hay Al Sukar neigbourhood. “I’m going to work, going to the market, like normal, and people are coming back to the city.”

According to Abu Sadr it is basically life as usual in Mosul. There is little of the tyrannical Islamic Sharia enforcement the group’s name has become synonymous with. Abu Sadr has seen Pakistani, Afghani and Syrian fighters amid the Iraqi ISIS recruits, but says the fighters have yet to adorn the city with their signature black flag. They fly them only above their checkpoints, which some residents say are fewer than the army had there, two weeks ago.

“The streets are a bit quiet, some people are staying inside,” he said.

That doesn’t mean things are easy under ISIS control. The internet has been cut and residents complain of limited fuel and water, and 22 hours per day without electricity, while temperatures hit above 110 °F. “Since June 10, no fuel has come into Mosul,” Nujeifi, the city’s governor, says. Lines are now forming outside petrol stations in the adjacent Kurdish territory, as Mosul residents come to buy fuel and return.

ISIS has tried to nominate a new governor from among the ranks of old Baathist officers, but no one was willing, according to Nujeifi. “They all refused because they know there is no future with ISIS,” he said. “They are not able to run the city by themselves.”

But for many in Mosul who despised the rule of Prime Minister Nouri al-Maliki’s Shi’ite-led government from Baghdad, a lack of services is not the most important thing. “We don’t have water or power but we have security,” said Omar, who came to Erbil from his native Mosul on Tuesday, a week after ISIS took the city. The streets of Mosul are calm, he said, and he only left for his job as a chef at this hotel in Kurdish Erbil. “They are not making any problems with the local people. ISIS only came for the army.”

The army didn’t stay. Iraqi troops abandoned their posts leaving a trail of weapons and uniforms. This week ISIS posted a series of gruesome photos online, claiming the mass execution of 1,700 Iraqi soldiers. The photos could not be verified, but came amid a wave of documented killings of army, police and civilians connected to al-Maliki’s government.

Some say this is a taste of what is to come in Mosul, and other places where the black flag of ISIS now flies. “ISIS has only been 10 days in Mosul…wait six months,” interjects Hassan, a Syrian from the city of Raqqa, standing at the hotel. “At first they make you love them, but wait.”

ISIS seized control of Raqqa in 2013, after the city was captured by Syrian rebels. Hassan says the first months were relatively normal. But soon ISIS imposed strict Sharia law, mandating conservative dress and prayer and burning piles of cigarettes, which are seen as sinful. Those who broke the rules received public lashings.

“I think we are all waiting for the other shoe to drop,” said Kenneth M. Pollack, a specialist in Middle East political-military affairs and a former CIA analyst. That it hasn’t dropped yet may be less a matter of ideology than one of resources, he says. If ISIS wants to build its Islamic caliphate from Mosul to Raqqa, it will need more than just the few thousand fighters it’s estimated to have in Iraq.

“They have made some remarkable gains, but they are still really few in number and trying to control an enormous amount of space,” says Pollack. “And they have a lot of competition in the form of the other Sunni militant groups and the Sunni tribes.”

In Syria, ISIS now fights both the government of Bashar Al-Assad and other rebel groups. Facing the Sunni tribes of Iraq, and their latent military power, would put their new gains at risk — so in places like Mosul, ISIS is staying on its best behavior. This approach seems to have brought them into a cautious alliance with the Sunni population that was disenfranchised for years by al-Maliki’s Shi’ite-led government. But at some point ex-Baathist nationalism and ISIS’s Islamic aspirations may clash.

“ISIS alone is never going to be able to hold this territory, never mind conquer more,” said Pollack. “Right now they are minding their Ps and Qs because they are trying to recruit and trying to expand their control.” 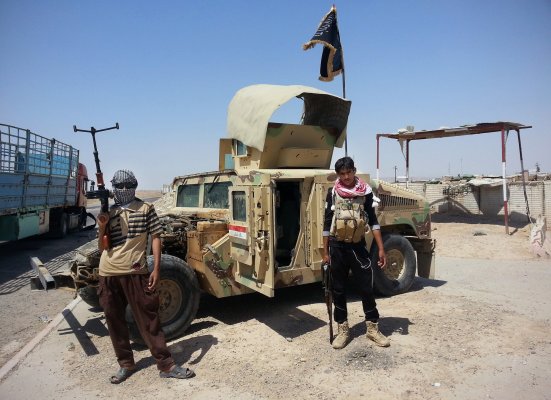 An American Attack on ISIS in Iraq Could Mean Retaliation Back Home
Next Up: Editor's Pick