Kim Kardashian spoke to the Daily Mail Wednesday at the MailOnline Cannes party about her parenting approach—on camera and off. She revealed that her child with husband Kanye West, North West, will appear on her reality show Keeping Up With the Kardashians this season:

“We film a lot now like in her room. And she’s in there, and you might hear her little voice. For her own privacy we don’t have her on that much, but she is in it a little bit this season as far as just around and in the room—not on camera—but you definitely feel her presence.”

But while some might challenge whether it’s a good idea to have a baby on a reality show, Kardashian argues that it affords her more time to spend with North. “The beauty of filming a reality show especially because we film at the house is that the baby’s there. As opposed to if I had a job in an office somewhere, I physically couldn’t be in the same room with her while I was working,” she says. “So I feel really lucky to have that advantage to spend so much time with her.”

Fans of Keeping Up might get an inside look into how West and Kardashian are raising their baby. Kardashian said that she considers herself a pretty strict mom—or at least more strict than her sister Kourtney: “I’m really fun and playful, but I’m more strict on nap times, sleeping in her own crib. Kourtney does a more attached parent style where her parents sleep in bed with her. So, you know, with the third baby coming, they’re going to need a bigger bed or they’re going to need some other rules.”

And the show may get even more cast members soon. Kardashian said that she plans to have more kids. “I grew up with a lot of siblings. I don’t know if I would really follow in my mom’s footsteps and have six. I think that’s a little crazy. I don’t know how they did it. They were in their twenties, so they weren’t really thinking right,” she joked. “But, you know, I like a big family. I would definitely like one more and see how that goes.”

MORE: Are You Mom Enough? 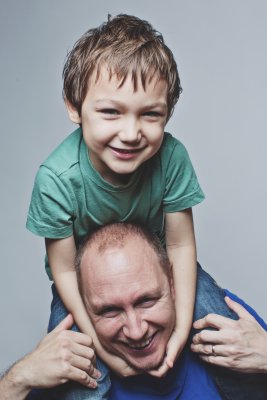 Breaking News: Having a Father Is a Good Thing
Next Up: Editor's Pick