Boomers: Prepare for Your Second Act

My friend Meg was successfully treated for thyroid cancer in her 30s, but at every annual checkup afterward she braced for bad news. At lunch after a recent visit with her doctor, she was wearing such a worried expression that we were prepared for the worst. Here’s what her doctor had said: “Meg, I think you’ve dodged a bullet. I don’t think that cancer is coming back.”

Good news! And yet the look on her face was not joy or even relief. Meg had been living year to year. Now, facing the prospect that she might go on living a long time, she felt completely unprepared. As she said, “What am I going to do for 40 years?”

It’s the question of the age–and the question of our age. My generation is the first to get a heads-up that many of us will be living longer than we ever imagined, many of us working into our 70s and living into our 90s. But what are we going to do? As Laura Carstensen, director of the Stanford Center on Longevity, notes, “The culture hasn’t had time to catch up. The enormity of this hasn’t hit people.”

Our midlives are lasting longer. What does midlife mean now? It used to be the beginning of a long glide into retirement, which many of us still look forward to. Unlike previous generations, who retired from something, my generation hopes to retire to something. Retirement is a word with new meanings–no longer a door marked EXIT. Think instead of a door that swings on a hinge, moving us forward to something new–though many if not most of us lack a ready answer for what that something is. Still, research has shown that people 50 and older are more active and vital in their outlook than 50-somethings were only 10 years ago! We share an inchoate feeling that there is something more.

Marc Freedman of Encore.org, which helps people pursue second acts for the greater good, says we’ve been blessed with a “bonus decade or two or three.” We still have options. And the Gen X-ers are not far behind–they started turning 50 in 2014.

The timing isn’t bad. A few years ago researchers discovered that, around the age of 40, people begin to experience a diminished sense of well-being. They were surprised to find this in men and women, rich and poor, all over the world. But the bigger surprise was what came next: around the age of 50, feelings of well-being begin to rise again–and keep on rising, well into the 70s. In the 21st century, 50 is the beginning of a new and aspirational time of life.

We have all known inspiring individuals who have defied the stereotypes of aging to lead long, creative and productive lives, but until now that was perceived as the exception. You may be surprised to know that people over 55 represent the largest group of owners of new business startups. At a time when our own parents and grandparents expected to wind things down, 50 is now the era of the second wind.

That doesn’t mean it is going to be easy. Stanford’s Carstensen notes that with our new vitality come some pretty big questions. “Those of us living today have been handed a remarkable gift with no strings attached–an extra 30 years of life for the average person,” she says. “Now that gift is forcing us to answer a uniquely 21st century question: What are we going to do with our supersized lives?”

I don’t fashion myself an authority, but I have spent the past few years of my life traveling the nation talking to people who have reinvented themselves. Here are some common misconceptions you may have about reinvention: that you have to get it right the first time; that there is some more authentic “you” waiting to be revealed; that reinvention is a total makeover. Or that everyone has a passion to follow.

Based on my own experience, I’d endorse a couple of counterintuitive ideas instead: Trial and error are keys to growth and self-knowledge. Reinvention may require being reintroduced to yourself. Self-discovery may not be a requirement for reinvention, but it may be the payoff.

It’s been my personal observation that if there’s a secret to reinvention, it’s that there isn’t one, or rather, there isn’t only one. There are as many ways to do it as there are experts eager to guide us. As Bertolt Brecht put it, “The shortest line between two points can be a crooked line.”

For the lucky few, here’s a chance to reach toward a long-nurtured dream. For many, the way forward may feel like groping in the dark, as it did for me. Frankly, we are all making it up as we go along. But how reassuring to know we’re all in this together.

Pauley’s latest book, from which this article is adapted, is Your Life Calling: Reimagining the Rest of Your Life (Simon & Schuster) 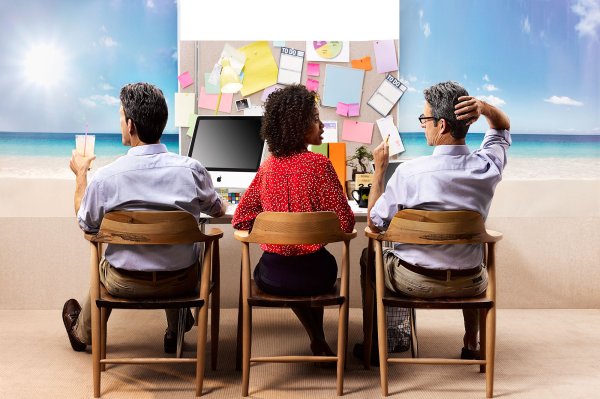 The 4 Words Terrifying Americans Right Now
Next Up: Editor's Pick