A man examines a T-shirt in the style of Brazil's national soccer team, being offered by a street vendor in Dhaka, Bangladesh, on June 1, 2014
A.M. Ahad—AP
By Joseph Allchin

On June 7, groups of Argentina and Brazil fans clashed over the World Cup — but not on the streets of Rio or in a sports bar in Buenos Aires. Instead, the unlikely location was Barisal, which is not — as it vaguely sounds — some upcountry Amazon backwater. It’s a port city of some 270,000 souls on the Kirtankhola River in Bangladesh. And the fans were Bangladeshi.

The trouble began when a Brazil fan, called Mahmud Hasan, was sitting in the dining room of the Barisal Polytechnic Institute and began chanting that the infamous 1986 “Hand of God” goal against England scored by Argentine star player Diego Maradona’s was “illegal.” Argentina fans sitting nearby took umbrage — and the subsequent clash injured 11.

Then, on June 18, in the town of Hatibandha in Bangladesh’s far north, an 18-year-old restaurant worker, Milon Hossain, was killed when rival groups of Argentina and Brazil fans began hurling stones at each other.

Bangladesh is a country in the grip of World Cup madness — and the two South American giants are luring fanatical levels of support.

The flags of Argentina and Brazil are flying everywhere. Local authorities in the western town of Jessore have gotten nationalist angst over the sight of so many foreign flags and tried to ban them, but in vain.

“We don’t mind people wearing jerseys of their favourite teams or [using] billboards or banners,” Mustafizur Rahman, a government administrator, told AFP. “But it does not look good when flags of foreign nations are flying on your rooftops. We have become a nation of Argentina and Brazil.”

The danger isn’t just limited to outbreaks of violence. In the capital Dhaka, at least three enthusiasts have died hanging Argentina flags from the city’s precarious electric wiring. They were later dubbed “World Cup martyrs” by the local press.

Ifty Mahmud, a journalist at Bangladesh’s largest daily newspaper, the Prothom Alo, says support for Brazil is rooted in Bangladeshi poverty. The Brazil team also “looks like us,” explains Ifty, “just see Pelé, Romário and Neymar, they are dark-skinned so are we, [Brazil] are poor, so are we.”

“The way he cheated the colonial power, because it was daylight cheating, had symbolic resonance,” concurs Abu Ahasan, a researcher and anthropologist at BRAC (formerly the Bangladesh Rural Advancement Committee, though these days it is known solely by the acronym). “The same thing happened with Muhammad Ali and the West Indies cricket team; it captured the imagination.”

The Argentina team, perhaps aware of their huge support base in Bangladesh, made a rare visit to the country in September 2011 playing Nigeria in a friendly match at Bangladesh’s packed national stadium. Current Argentina and Barcelona star Lionel Messi shimmied his way into the nation’s affections, and giant screens were erected around the city for fans who could not get tickets.

Such is the fanaticism for the two South American teams that members of an E.U. mission have been trying to understand why European teams aren’t more popular. Despite the game being introduced in the country by the British, its mournful memo pointed out, “there are hardly any visible England flags on the streets.”

Correction: The original version of this story misstated the name of a journalist. He is Ifty Mahmud, not Ifty Islam. 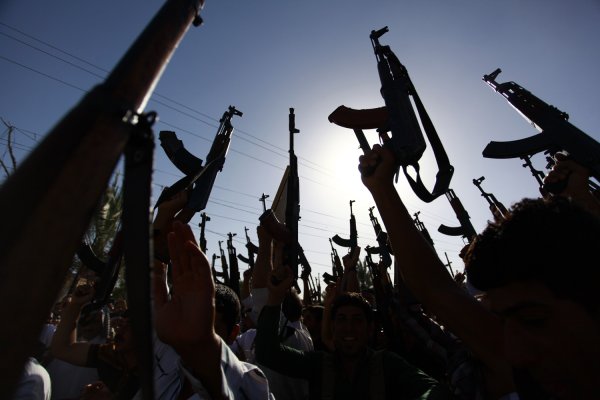 Iraq Pleads for U.S. Airstrikes
Next Up: Editor's Pick