Mike Daisey is a self-described “monologist” who says he likes his work to be “provocative.” If you’re one of the 2.1 million individuals who tune into This American Life each week, you may know him better as the guy who made up a bunch of stuff about Foxconn factories in China in order to sustain his blistering indictment of capitalism.

Even though he defended his deceit — “the tools of the theater are not the same as the tools of journalism” — he’s kept an understandably low profile since the otherwise docile Ira Glass essentially skewered him on-air two years ago in a rare retraction of the original program.

Daisey’s latest endeavor has returned him to the public eye, though the guy can’t seem to catch a break.

Next week, he will take to the stage in New York City to perform a monologue that will scrutinize, he says, “how our world is built on the subjugation and ownership of women, and how men perpetuate that violence every day.” He’s calling it Yes This Man, a play on the hashtag #YesAllWomen, which first surfaced on Twitter as a tool of solidarity after the recent mass shooting in Santa Barbara, Calif. (The young perpetrator released a misogynistic manifesto immediately prior to the attack.)

#YesAllWomen was in fact the original title of Daisey’s performance until a Twitter tempest forced him to admit that people were “genuinely hurt” by what they saw as insensitivity, or maybe just shameless topicality.

Rampant misogyny, according to Daisey, is an American epidemic and constructs an “untellable story” — one that he’ll try to tell, of course, because he’s, well, provocative.

“Daisey doesn’t try to speak for women,” the monologue’s description reads. “Instead he interrogates his own history and choices as a way of framing a human discussion about how it could be possible to live an authentic life where we actually see one another.”

His musings on the matter can be heard at Joe’s Pub in lower Manhattan, where he’ll be performing the monologue on June 25. 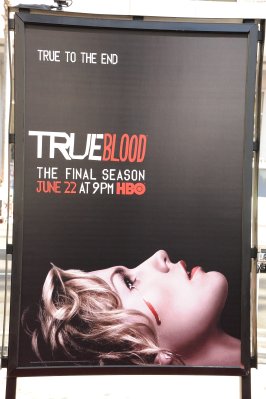 True Blood: The Musical May Actually Happen
Next Up: Editor's Pick