5 Things You Need to Know About Amazon's Fire Phone

Amazon put the rumors to bed on Wednesday and announced the Fire Phone, the company’s first smartphone.

The market is already full of high-end handsets, so it’ll be tricky for Amazon to stand out from the herd. But here are several things that the retailer hopes will get your attention:

It Has the 3D Gimmick Everyone Expected

As rumored, the Fire Phone has multiple cameras on the front that can track the position of the user’s head, creating a 3D effect as your perspective shifts.

It’s not just about curb appeal; tilting the phone can reveal hidden menus, such as a search bar or an options panel. Users can also scroll through books and web pages by tilting. Developers can also build 3D tilt effects into their games and apps.

The Hardware Has Some Nice Touches

On paper, the Fire Phone’s tech specs don’t seem much different from other high-end phones. It has a 4.7-inch HD display, a 2.2 GHz quad-core processor, 2GB of RAM and a 13-megapixel camera.

But Amazon has paid attention to the little details. The camera, for instance, includes optical image stabilization and an f/2.0 aperture, so it should be able to rival Apple’s iPhone 5S and HTC’s One (M8) in low-light performance. The screen is among the brightest on the market, and includes a circular polarizer to help with outdoor readability, even if you have sunglasses on. Amazon’s also including a pair of earbuds that clasp together magnetically and use a thick, tangle-resistant cable. There’s nothing revolutionary here, but it sounds like a solid piece of hardware.

There’s a Button for Identifying (and Buying) Stuff

This wouldn’t be an Amazon product without deep hooks into the company’s online store, so the Fire Phone includes a dedicated “Firefly” button on the side. Press the button, and the Fire will scan the real world for bar codes, book covers, magazines and phone numbers. It can also identify songs and videos by listening for the audio track. With this button, Amazon says it can identify more than 100 million items.

Obviously, you’ll be able to buy things from Amazon after Firefly tags them, but Amazon is promising other uses that don’t involve your wallet. For instance, you might be able to open a song in your streaming music app of choice, or scan the bag of chips you’re eating into a nutrition app. This all depends on whether developers make use of Amazon’s tools to hook into Firefly.

It’s All About Amazon Services

The Fire Phone includes one year of Amazon Prime service, which normally costs $99. This includes a selection of streaming video, streaming music and e-book rentals, and Amazon is throwing in unlimited photo storage as well.

Meanwhile, some of the features we’ve seen on Amazon’s Kindle Fire tablets are making their way to the Fire Phone. The “Mayday” button provides near-instant tech support over video chat, and “ASAP” pre-loads videos based on your viewing habits, so you spend less time buffering. If you have a Fire TV set-top box, you can send photos and videos to the set-top box by pressing a button on the phone. You can also use Amazon’s X-ray feature to get more information about whatever you’re watching.

The software otherwise looks similar to that of Amazon’s Kindle Fire tablets, with a carousel of featured apps and media on top, but Amazon is also adding some “active widgets” underneath the carousel. These can include recent e-mails and recommendations from Amazon’s store. Users can also switch to a more traditional grid view for apps. (One glossed-over downside to Amazon’s software, which is loosely-based on Android: Its app selection is smaller than the iOS App Store and Google Play Store, and there are no official Google apps to speak of.)

It’s an AT&T Exclusive, Priced on the High-End

Despite all the speculation about Amazon shaking up the pricing model for smartphones, the Fire Phone costs about the same as any other high-end handset. The Fire Phone starts shipping on July 25, and will cost $200 with 32 GB of storage, or $300 with 64 GB of storage. You can also buy it without a contract for $649 to $749. 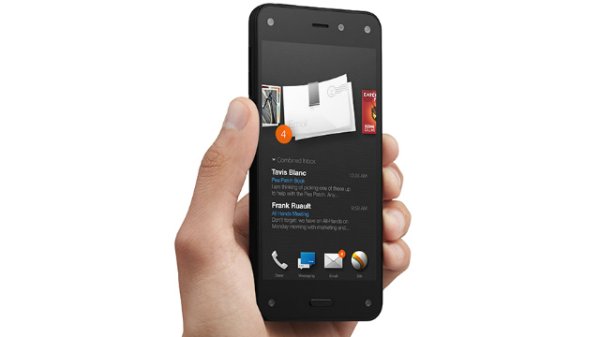 What to Know About Amazon's New Phone (in 90 Seconds)
Next Up: Editor's Pick