U.S. President Barack Obama on the South Lawn of the White House in Washington, June 13, 2014.
Kevin Lamarque—Reuters
By Mark Thompson

The capture of Ahmed Abu Khattala, the recently-snatched alleged ringleader of the 2012 attack on the American consulate in Benghazi, once again highlights the split in the national debate over how to handle terrorists: Are they prisoners of war, or are they criminals?

Many terrorists linked to al-Qaeda were sent to Guantanamo Bay during George W. Bush’s presidency. Many others have been tried in civilian courts. According to the nonprofit group Human Rights First, there have been almost 500 people convicted on terror-related charges in federal civilian criminal courts since 9/11, compared to eight convictions in the Pentagon’s military commissions.

“Rather than rushing to read him his Miranda rights and telling him he has the right to remain silent, I hope the Administration will focus on collecting the intelligence necessary to prevent future attacks,” added Sen. Kelly Ayotte (R-N.H.).

Who’d have thought a 1966 Supreme Court ruling designed to protect Ernesto Arturo Miranda’s confession to kidnapping, rape and armed robbery while under police interrogation would become the rope in a tug-of-war between the White House and Congress nearly a half-century later on how to handle captured terrorists?

Legal expert Jack Goldsmith. a former Pentagon lawyer now teaching at Harvard Law School, doubts the U.S. could hold Khattala in military detention, or try him before a military commission. That’s because Army General Martin Dempsey, chairman of the Joint Chiefs, has said the Benghazi attack didn’t fall under the congressional authorization for the use of military force, nor, in Goldsmith’s view, did it amount to a “conflict subject to the rules of war.”

Sending Khattala to Guantanamo is “the easy way out,” said Sen. Patrick Leahy, (D-Vt.), chairman of the judiciary committee, who applauded his move into the federal court system. “We will try Khattala just as we have successfully tried more than 500 terrorism suspects since 9/11.”

The Obama Administration is actually straddling the issue, by housing Khattala aboard a Navy vessel in the Mediterranean for questioning (the Los Angeles Times reports he did get a Miranda warning “shortly after his capture” following initial questioning about other potential terror threats under a “public safety” exemption). “We should have some quality time with this guy—weeks and months,” Sen. Lindsey Graham (R-S.C.), an Air Force reserve lawyer, said Tuesday. “Don’t torture him, but have some quality time with him.”

The Administration has questioned at least two other terror suspects aboard ships for up to two months before dispatching them into the federal court system.

“The only reason for having him on a U.S. warship is to provide a nice quiet environment where the investigators can work their wiles on him,” says Eugene Fidell, a military-law lecturer at the Yale Law School and former president of the National Institute of Military Justice. “If the government wanted to have Khattala at the E. Barrett Prettyman courthouse [in Washington, D.C.] by four o’clock, he’d be there. The notion seems to have taken root that the government has, if not all the time in the world, as much time as it reasonably wants to see if can coax these people into making statements.” 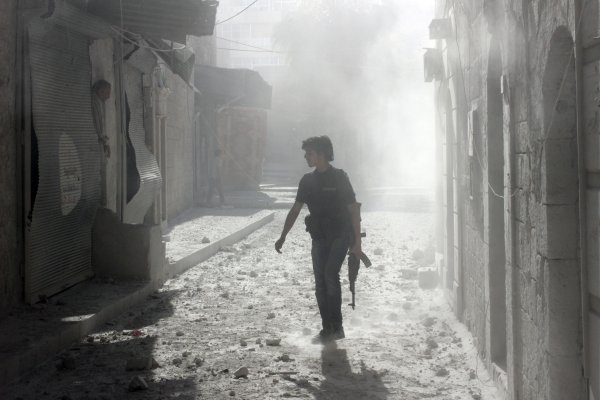 Syria's War Is Spawning 'New Generation of Terrorists'
Next Up: Editor's Pick