REVIEW: The Music Is Sharp, the Drama Flat in Jersey Boys

Jersey Boys opened on Broadway in October 2005, won four Tony Awards (including Best Musical) and is still going strong after 8½ years. Essentially a “legends” tribute plus some insider gossip, like the current Tony champ Beautiful: The Carole King Musical, the Four Seasons show hooked audiences with the glorious caterwauling of lead singer Frankie Valli as originally and expertly impersonated by John Lloyd Young (also a Tony winner), and then dished out the more or less true behind-the-music story of four North Jersey guys godfathered by a Mob boss. This canny mix — the Falsetto meets the Sopranos — guaranteed a bridge-and-tunnel stream of Garden Staters ready to sing along to some of the most infectious and enduring pop of the 1960s.

Now it’s a movie, scripted by the show’s writers, Marshall Brickman and Rick Elice, and directed by Clint Eastwood, who might seem just the man for the job. The 84-year-old star-auteur composed the scores for seven of his films. He directed the Charlie Parker biopic Bird (with Forest Whitaker) and the 2003 documentary Piano Blues. In Play Misty for Me, his first film behind the camera, he took the role of a disc jockey spinning classic jazz, and he was a traditional country singer in Honkytonk Man.

(SEE: The Legend of Clint Eastwood)

So why is the Jersey Boys film a turgid botch? Eastwood’s résumé hints at a reason. His affinity is for American standards as improvised on piano or guitar by indigenous artists in smoky nightclubs, not for the tightly wound, impeccably pounding songs that Bob Gaudio and Bob Crewe wrote for the Four Seasons. Eastwood is mature jazz; they’re teen pop. When the movie’s Gaudio (Erich Bergen) watches a 1961 episode of Rawhide, with Eastwood romancing Gloria Talbott, you realize that Eastwood was already in his 30s, too old to feel the Seasons’ seismic jolt.

Having little emotional connection to the source music, Eastwood emphasizes the backstage struggles of the individual members: founder and serial criminal Tommy DeVito (Vincent Piazza), bassist and fellow felon Nick Massi (Michael Lomenda), Valli (Young, reprising his stage performance) and, odd man out, the middle-class Gaudio. Eastwood’s movie models include his own Mystic River, another story of anguished bonding among proletarians with eccentric accents, and Martin Scorsese’s Goodfellas, including an appearance by the young Joe Pesci. At 2 hr. 14 min. the movie is nearly as long as the Jersey Boys show, but with much more talking and a lot less singing. If you want to hear all the songs, buy the greatest-hits album.

Seriously, buy the album, or listen to the original songs on an iPod or on YouTube. Produced by Crewe (played here as a purring gay dandy by Mike Doyle), they sound much crisper than they do in the film, which uses snippets of many numbers and adds odd flourishes to others, like the trombone blurts in Valli’s solo hit “Can’t Take My Eyes Off You.” The show expertly duplicated the Seasons’ sound, and Young’s raspy falsetto filled the large theater. In the movie, the star is not always in his best voice. Since Piazza (Lucky Luciano on Boardwalk Empire) is not a professional singer, and since Eastwood uses most of the songs as filler, he may as well have had his actors lip-sync the Seasons’ tracks. But he either couldn’t hear the difference or just didn’t care.

(WATCH: The trailer for Jersey Boys)

Shot by cinematographer Tom Stern in a predominantly desaturated palette, as if New Jersey couldn’t afford color in the late 1950s, the movie sets up the antagonism of Tommy, a born hustler who keeps trying to con gangsters even after the Seasons hit pay dirt, to Gaudio, who just wants to write for Frankie’s voice. Their underworld mentor is Gyp DeCarlo, a benevolent mobster moved to tears by Frankie’s rendition of “My Mother’s Eyes” and played by Christopher Walken with a good less quirk than he brought to his conversation about skunks and otters on The Daily Show last week.

Eastwood doggedly tracks Frankie’s bumpy marriages to local girl Mary (Renée Marino) and journalist Lorraine (Erica Piccininni) and his frayed relationship with daughter Francine (Freya Tingley as a teenager). In an interminable third-act face-off, Gyp presides over the breakup of the band, with each member getting a verbal aria to spill the resentments that have boiled for years. As with so much else in Jersey Boys, they should’ve been sung.

The curious thing is that the movie’s theme — boys from the wrong side of the Hudson striving to make it in the big city — underlies many Four Seasons songs. “Big Man in Town”: ambitious poor boy dreams of approval from a rich girl’s parents. “Dawn (Go Away)”: poor boy selflessly tells rich girl she’d be better off with her own kind. “Rag Doll”: rich boy’s parents keep him from courting the poor girl he loves. Class divisions matter in these proletarian ballads about wanting and hurting. The Jersey Boys show attended to the group’s personality clashes and still had room for 34 numbers, half of them Seasons hits, the others filling in the period’s pop ambiance. But Eastwood thinks audiences are more interested in the anomaly that four people who made beautiful music had lives with little harmony.

(READ: Jersey Boys on Broadway — The Falsetto and the Sopranos)

The movie is much better at dramatizing the inner workings of the music business. A vertical tracking shot up the front of the Brill Building shows different singers — country, rockabilly, jazz — auditioning for producers. (Even this nice shot is a bit off: in the late ’50s, the hopefuls should have been doo-wop quartets, girl groups and balladeers.) Some of the hoariest biopic clichés play beautifully, like the view of a company sign that gives the group its name, or the evening when Gaudio, new to the group, plays his composition “Cry for Me” on the piano — by the end, each of the three skeptics is singing along in perfect four-part.

Each member of the group narrates a section of the film, and Frankie gets the last word. “When everything dropped away and all there was was the music,” he says, “that was the best.” The music was the best thing about the Four Seasons and the central asset of the Jersey Boys show. By concentrating on the group’s personal wrangling, to the near exclusion of their songs, Clint Eastwood has jettisoned the joy and made this a one-Season movie: winter in New Jersey. And, man, that’s bleak. 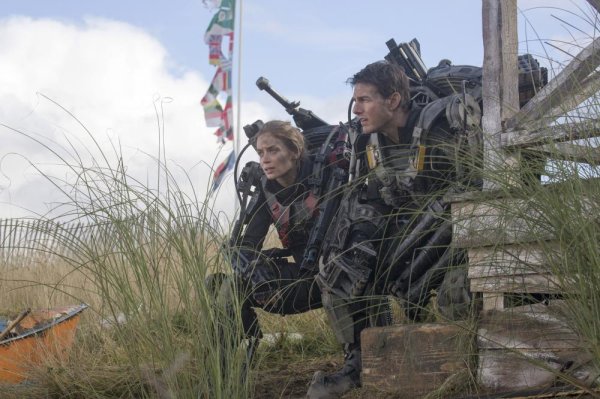 Tom Cruise and Emily Blunt in Edge of Tomorrow
Next Up: Editor's Pick