So How Successful Is the U.S. When It Comes to Ending Wars?

Ending a war is often a complicated affair.

In December 2011, President Obama told U.S. troops returning home from their final tours in Iraq that the American mission in the country was effectively accomplished.

“We’re leaving behind a sovereign, stable and self-reliant Iraq with a representative government that was elected by its people,” said Obama during a ceremony at Fort Bragg. He was wrong. Iraq was still fragile and haunted by simmering sectarian tensions.

The blitzkrieg offensive led by the Islamic State of Iraq and Syria (ISIS) and a smattering of Sunni militias last week across the country’s northwest has renewed discussion about the Obama Administration’s failure to negotiate a deal to leave behind a residual force in the country.

Debates over leaving American boots on the ground in foreign nations, after years of war, are often heated, especially when the conflicts were deeply unpopular. But here’s a quick rundown of how major U.S. withdrawals fared when peacekeeping outfits stayed behind in foreign theaters — vs. what happened when the military simply packed up camp and went home.

After six years of invasions, bombing campaigns, offensives and counteroffensives across Asia, the Second World War in the Pacific was brought to an end with Japan’s formal surrender on Sept. 2, 1945. The country’s military was disbanded by General Douglas MacArthur and a new “pacifist” constitution was drawn up to govern the nation.

Tokyo and Washington later signed a defense treaty that would allow U.S. forces to remain in the country and, in return, the American military would be responsible for the nation’s security. Today, 38,000 U.S. troops are still stationed in Japan at installations across the archipelago nation. How has the agreement fared? Extremely well. Japan has not engaged in any major military conflict since World War II and currently has the third largest economy in the world.

In the wake of Tokyo’s pullout from the peninsula in 1945 after the end of World War II, the U.S. established a residual presence south of the 38th parallel that was mostly made up of a small advisory force meant to help train the South Korean military.

However, according to Dr. Kalev I. Sepp, a former Deputy Assistant Secretary of Defense: “Their presence, unsupported by air power or ground combat units, did not deter the North Korean army from invading the South in 1950, and almost conquering the entire country.”

Following years of bloody civil war in Korea, the 1953 armistice brought fighting between Pyongyang and Seoul to an end. In the war’s wake, the U.S. has maintained a massive military presence in the country, which includes infantry divisions, fighter jets and nearby battle fleets. Approximately 28,500 American troops are currently stationed in South Korea.

“This powerful deterrent force held the North Korean dictatorship in check for over a half-century to today, supporting the U.S. policy of defense of democratic South Korea,” says Sepp.

Although the Korean Peninsula is still technically at war, South Korea has enjoyed decades of peaceful development that have transformed the country from a flattened war zone to a humming international hub of commerce.

The precipitous collapse of the Southern Vietnamese government in the face of a massive Hanoi-led offensive marked one of the most embarrassing moments in the history of U.S. foreign policy, after tens of thousands of American lives were lost and billions of dollars poured into the floundering Republic of Vietnam.

In January 1973, Hanoi and Washington inked the Paris Peace Accords and the U.S. pulled out its troops just two months later.

Although President Richard Nixon claimed the deal would “end the war and bring peace with honor,” by April 1975, the North Vietnamese overran the south, and on April 30 tanks slammed through the gates of the Presidential Palace in Saigon. The Republic of Vietnam vanished and the country was reunited under communist rule after decades of conflict and more than a century of colonial occupation.

The country was almost immediately pinned down in large-scale wars with Cambodia and China following the American pullout. Another 20 years would pass before the U.S. and Vietnam would normalize relations.

U.S.-led NATO offensives in Bosnia and Kosovo, in the wake of years of gruesome sectarian war in the former Yugoslavian territories, ended with negotiated deals ironed out in Dayton, Ohio, and in a U.N. Security Council Resolution. Following the agreements, massive peacekeeping forces were left behind in both countries and then gradually withdrawn as tensions cooled between the various ethnic groups and stakeholders in the region.

“I think the key lesson to learn from the Balkans is when you’ve got a highly mobilized ethno-sectarian identity war, like we had in the Balkans and like we had in Iraq by 2006, people don’t just get over these kinds of fears and hatreds that sort of warfare produces overnight,” Stephen Biddle, adjunct senior fellow for defense policy at the Council on Foreign Relations, tells TIME.

According to Biddle, residual forces in the Balkans provided a textbook example of how peacekeepers can be utilized to create breathing space for states recovering from bloody bouts of sectarian fighting and provide a way for grievances to be mediated instead of allowing them to relapse into tit-for-tat violence.

“[It] in turn tends to keep the temperature down and the violence level under wraps as the various internal parties gradually relearn to cooperate with each other,” says Biddle. 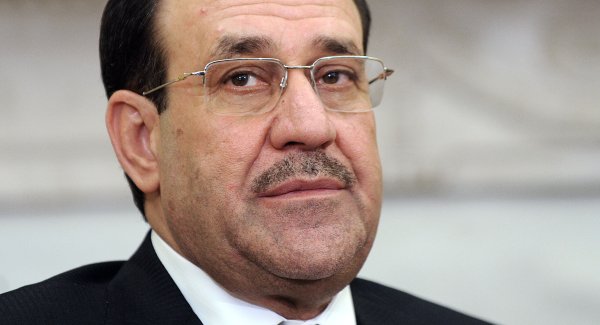 Al-Maliki Holds the Key to Iraq's Problems
Next Up: Editor's Pick