A Young Thai Activist Has Vanished, and the Junta Isn't Saying Anything

Kritsuda Khunasen was seized on May 28 in Chonburi province, and her arrest was documented on TV. However, nothing has been heard of her since.

Instead of disclosing her whereabouts, or providing evidence of her release, the junta on Tuesday included her name on a list of people ordered to report to them by June 18 — creating the impression that she had not already been detained.

“Summoning someone already in custody raises concerns that the authorities may be preparing to cover up a disappearance and that something may have happened to Kritsuda,” said Brad Adams, Asia director at Human Rights Watch (HRW), in a statement released by the New York City–based advocacy group.

Since her arrest, neither Kritsuda’s family nor Thailand’s National Human Rights Commission have been able to locate her, the group says.

“The Thai military should put to rest fears that Kritsuda has been forcibly disappeared by immediately disclosing her location and allowing access to a doctor and a lawyer,” stated Adams. “Concerned governments should demand that Thailand’s military authorities immediately explain what has happened to her and ensure her safety.”

Kritsuda was a prominent member of the United Front for Democracy Against Dictatorship (UDD) activist group, colloquially known as the Red Shirts, which backed the government of ousted Prime Minister Yingluck Shinawatra and vehemently opposed military intervention in the nation’s protracted political crisis.

“I still do not have any information,” says Dr. Weng Tojirakarn, a UDD leader who was recently released by the military, subject to stringent constraints. “I’m very concerned that she is missing as everybody would like to see basic human rights maintained.”

Since the May 22 coup, an estimated 500 politicians, activists, journalists and academics have been arbitrarily detained, although no exhaustive figures have been released. HRW alleges that a significant number of secret military detentions have also taken place.

Those critical of the coup — the 12th successful putsch since the end of absolute monarchical rule in 1932 — have been harassed at home and work, threatened with imprisonment or detained. Thais working abroad have been pressured to rein in their disapproval.

The junta evidently feels confident enough to order the nationwide curfew to be lifted on Friday. Coup leader General Prayuth Chan-ocha has since promised “a government will be set up by August, or at the very latest September,” with elections some time in the next 15 months.

Nevertheless, critics and activists feel cowed and extremely wary. One grassroots Red Shirt activist in northern Thailand, who asked to remain anonymous for fear of arrest, tells TIME that three of her cohorts were ordered to report to military authorities in the capital on Wednesday, despite halting all political work.

“One of them has been detained by soldiers in Chiang Mai two times [since the coup], and the other two have been detained once before,” she says, “but now they all have to go to Bangkok.”

Meanwhile, rumors of a crackdown on migrant labor — considered the backbone of Southeast Asia’s second largest economy — have prompted some 188,000 Cambodians to flee back home amid fears of arrest, deportation and being shot if they attempt to evade the authorities.

Eight people have so far been killed in traffic accidents related to the exodus. “I think that the current leaders of [the] Thai junta must be held accountable for what has happened,” said Cambodian Interior Minister Sar Kheng. 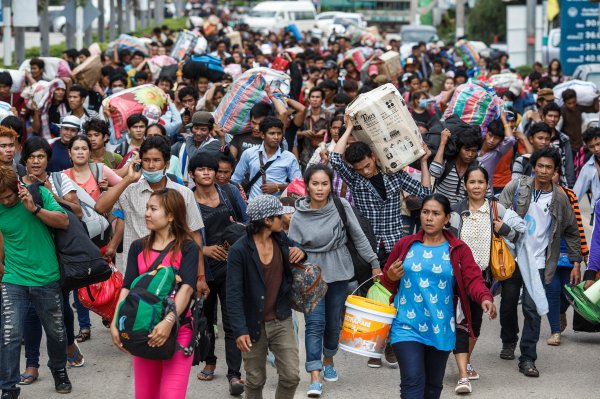 Thailand: 120,000 Cambodian Migrants Flee the Junta
Next Up: Editor's Pick