“In Nashville, it’s a lot easier to find a log to sit on than it is here.” This is what Miley Cyrus told the audience at her MTV Unplugged taping in Los Angeles on Tuesday evening; the singer had taken a seat on something that looked more like a wooden hitching post than a log, but she was right — logs aren’t common in LA. Luckily, the one she found fit her theme perfectly.

At Hollywood’s Sunset Gower Studios, the producers of Unplugged had successfully transformed a soundstage into a hoedown, complete with bales of hay and a massive light-up wagon wheel. Cyrus’ explanation? “I don’t know if y’all know this or not, but I’m from Nashville,” she told the audience, after dutifully hollering “Yee-haw!” a few times. “I tried to bring a little bit of Nashville here tonight.” (Yep, you might even call it “definitely a Nashville party.”)

The Unplugged special, which airs Wednesday night on MTV, marks the first time Cyrus has played many cuts from her album Bangerz in concert. A few of the tracks will make their live debut in this set — and it’s telling that they’ll see their debut in this format, since Cyrus “unplugged” these songs with a banjo, infusing them with a rootsy country flavor.

In 2012, long she’d signed with RCA and begun transforming into a full-fledged provocateur, Cyrus filmed several acoustic performances outdoors in Los Angeles; she dubbed them “The Backyard Sessions,” offering up strikingly beautiful renditions of well-loved tunes like “Jolene” and “Lilac Wine.” These were pre-pixie cut, pre-twerkgate, pre-wrecking ball; they revealed that the former teenage star was a true singer, that her voice had the capacity to convey real emotional weight, even without the help of studio wizardry. The sensibility of those clips aligns what you’d expect from an Unplugged session — right?

Not with present-day Cyrus at the helm. The singer confessed that she’d hoped to tape the special in a nightclub with a bigger audience, but MTV wouldn’t let her. She unleashed enough profanity to keep MTV’s Standards and Practices department busy all night. And when she arrived onstage to open the show, clad in a tight Western-themed red and white checkered jumpsuit and a blonde wig, she was accompanied by two men in a horse costume and one of her requisite little people dancers. (The entire section of spectating press audibly sighed at the sight.)

For Cyrus, it seemed, stripping down the music didn’t require stripping down her antics: She twerked with the faux horse, ground her pelvis into its back, and petted the little person’s hair; she grabbed her crotch and gyrated relentlessly. Fans hoping for emotional gravity received were met with twangy Western versions of her album tracks and oversexed hyperactivity.

Over the past several months, Cyrus has turned herself into a meme, time and time again. Her cheekily calculated behavior arrives pre-packaged to go viral; it requires little effort on viewers’ part to make her GIF-worthy antics iconic. But she pays a price for that, relying on gimmicky visuals that too often overshadow the merit and sentiment in the music. Her single “Wrecking Ball,” a haunting ballad that packs even more power live, became self-parodying in her music video, allowing shock value to eclipse emotional impact. Even in this taping of Unplugged, which saw Cyrus trade her cowboy outfit for a glittering pair of pants and bikini top partway through the show, she sometimes attempted to emphasize visual comedy over musical skill.

But ultimately, Cyrus is so talented a vocalist and so deeply invested in her own music that even crotch grabs can’t always distract from how seriously impressively she belts out her Bangerz ballads, as aided by a string quartet. Even when special guest Madonna arrived onstage toward the end of the show to duet with Cyrus (the two performed a mash-up of Cyrus’ “We Can’t Stop” and Madge’s “Don’t Tell Me”), not even Cyrus’s desire to rub herself all over Madonna distracted from the quality of the collaboration.

“That was pretty fucking cool, you guys,” Cyrus told the audience between takes. “It’s pretty cool performing with Madonna.” She added, “It’s a great day. There’s nothing I can complain about. Well, I can’t be stoned when I perform – that’s a little something to complain about.”

The best parts of the taping came in these moments, between songs; unfortunately, you likely won’t see Cyrus gabbing with the crowd in the final show, joking that she’s ruined the SNL skit that parodies her because she now says “pretty fucking cool” instead of “pretty cool.” Cyrus is funny – you can’t twerk with a horse onstage and not be. “I feel like I’m at karaoke but it’s only my turn,” she said at one point. Later, she joked, “MTV is paying me in ones so we can all go to the strip club after this.” Her best line? “You can look at life one way or the other — half-naked or half-clothed.” It’s practically a mission statement.

The singer thanked MTV as she finished the taping, calling the network “brave” for letting her attempt this production, although she probably deserves much of the credit. Musically, it’s fresh and exciting for Cyrus to take pop songs with electronic and rhythmic production and reimagine them with an acoustic country sound; it worked better on some songs than on others, but if nothing else, Cyrus was willing to take the risk. She performed some covers – one obvious, one not so much – and even got two cast members from Scandal to join the audience because the series was taping on the same lot. (Kerry Washington, who passed by the soundstage earlier in the night, couldn’t make it, telling the waiting line of journalists to “twerk hard” for her.)

At its best, an Unplugged session should pare a musician’s work down to its barest bones, to see what it becomes without all the bells and whistles that make a song a hit. On some songs, that’s the result you get with Cyrus, when she calms down, leans against her log and sings. At the heart of these tracks, behind the dancing little people, glittering costumes, exposed flesh and self-deprecating quips, there’s a whole lot of feeling — and that’s, as she would say, pretty cool. 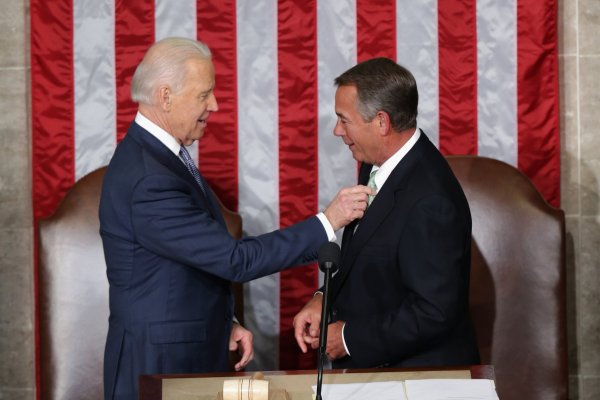 State of the Union: Handshakes, Hugs and Photo Ops
Next Up: Editor's Pick