USA Goes Back to its Roots to Drum Up Winning World Cup Formula vs. Ghana

John Brooks of the United States celebrates after scoring the team's second goal during the World Cup match against Ghana on June 16, 2014 in Natal, Brazil.
Alex Livesey - FIFA—FIFA via Getty Images
By Brian Straus / Sports Illustrated

Coach Jurgen Klinsmann’s ambition to reshape the American game, from player development and professionalism to technique and tactics, remains the long-term aim. But it took a back seat Monday night here at the Arenas das Dunas in the colorful city on Brazil’s northeast coast where the U.S. opened the 2014 World Cup.

The proactive panache with which Klinsmann hopes to play would have to wait. The opponent, Ghana, and the circumstances required pragmatism, grit and commitment. Those are qualities the Americans have boasted for years, and they carried them to a 2-1 victory that might be tough to explain on paper but made perfect sense to the men who engineered it.

“It’s just something that’s written in our DNA,” said midfielder Graham Zusi, who hit the corner kick that led to reserve defender John Brooks’ 86th-minute match-winner. “It’s just the U.S. mentality. It’s the best I can describe it.”

Klinsmann’s effort to build a team that can possess the ball and dictate tempo has been met with mixed results. Taking the game to CONCACAF rivals is one thing, but the World Cup represents a different level. Ghana had come to embody that next step, eliminating the U.S. with 2-1 wins in both the 2006 and 2010 tournaments.

A sound American game plan would have to account for Ghana’s speed and ruthless attacking efficiency, and, to Klinsmann’s credit, he opted for the practical over the proactive. The squad’s most conservative central midfielder, Kyle Beckerman, anchored a quartet that featured Michael Bradley in a more withdrawn role than he’s played in recent games, along with Jermaine Jones and Alejandro Bedoya on the flanks.

The mission was clear: clog the middle and force Ghana either to play the extra pass through the midfield thicket or launch crosses from the wings. What resulted was a U.S. team that, aside from Clint Dempsey’s stunning first-minute goal, resembled its predecessors more than Klinsmann’s ideal.

“We switched to a 4-4-2 just straight up, a flat 4-4-2, and when you’re playing that, you’re pretty much going to play a counterattack,” Beckerman explained. “So I thought mainly the dangerous things that they had were getting it wide and crossing it in, a lot of half chances. But I thought we had some good blocks of four [midfielders and defenders].”

Ghana handled Dempsey’s early goal well, put the U.S. on the defensive and spent a significant majority of the next 80 minutes in the American end. Bradley called it a “tailspin.” The Black Stars won the possession battle, 59-41 percent, completed a far greater number of passes and outshot the U.S. 21-8. Yet that advantage didn’t translate to the sort of point-blank scoring chances that might unhinge the U.S.

An equalizer seemed likely but not inevitable, and the Americans adapted after losing target man Jozy Altidore and central defender Matt Besler to first-half hamstring injuries. Dempsey, who had his nose broken by a Ghanaian boot in the 33rd minute, continued despite breathing issues and blood in his throat.

“It will happen to all teams: injuries, problems, issues. That’s why you have a roster of 23 players and they have to understand exactly their role,” Klinsmann said.

Added Beckerman: “It’s tough to be not starting and having to come in early like Aron[Johannsson] did [for Altidore], and then you never really think a center back is going to go down and Brooks was focused and that was really good to see. And everybody fought for each other. We watched each other’s back.”

John Brooks Emerges as Unlikely World Cup Hero for the USA vs. Ghana

The U.S. continued defending vigorously in the Natal humidity, two of three substitutes having already been used. Center back Geoff Cameron was a monster in front of goalkeeper Tim Howard and in the second half, the Americans shored up the leaky left thanks to a robust effort from Jones.

“Tactically they’re really disciplined, and I knew it was never going to be an easy game,” Black Stars coach James Kwesi Appiah said.

The U.S. actually enjoyed its first decent stretch in some time just before Ghana leveled the score in the 82nd. At that point, it felt like Dempsey’s goal had been scored during the pre-World Cup sendoff series. Legs were heavy, and, considering the injuries and prevailing run of play, a draw would have been a respectable result.

But the thousands of U.S. fans who filled the Arenas das Dunas chanted “I believe that we will win!” for a reason. This is a team with a tradition of late heroics – look no further than the 2010 World Cup – and there was a sense among the U.S. players that there somehow was another goal in a game that almost got away from them.

“The commitment, the mentality, the determination, just the willingness to fight, the response after they got to 1-1 was really good – positive body language – everything was exactly what you’d want. In the end, to get the winner is deserved reward in a lot of ways,” Bradley said. “After they scored we made a real point of now attacking and seeing now if there wasn’t another chance left for us.”

Said Zusi, who replaced Bedoya: “It’s the mentality of us to never be satisfied with just getting out of there with something. We always want to push. Obviously if we’re in a situation where we’re up, we’re going to be smart. But in that situation we were in, we wanted all three [points]. We felt like we needed all three.”

So they went and got them. Right back Fabian Johnson took a chance, pushed forward and earned a corner kick. Zusi delivered it, and Brooks, the towering 21-year-old with just four caps to his credit, headed the ball home.

“When a set piece comes like a corner kick, we always have a little more hope, because we are very good in that,” Klinsmann said. “We have players who are determined to get onto those balls.”

Set pieces, defend with discipline and counter, believe despite the odds: this was old fashioned American soccer. It isn’t nearly enough to win a World Cup, and Bradley, who didn’t have his best game, knows it.

“We’re certainly honest with ourselves and know that we can and need to get better,” he said.

Easy passes were missed, runs were cut short and on occasion, the U.S. pulled the ball back and gave Ghana time to re-establish its defensive shape. Possession and build-up must improve and Klinsmann’s ultimate goal — to build a squad that can keep the ball and put the top teams on their heels – won’t be abandoned.

But Monday’s win, the Americans fifth in a World Cup in the past six decades, sends a couple of critical messages. One is that Klinsmann won’t sacrifice short-term results for long-term ideals. The other is that, when necessary, an evolving U.S. team still has some deep-rooted traditions it can count on. Pretty or not, three points is three points.

“We didn’t play our best game, but we grabbed a result and showed a lot of character,” Dempsey said. 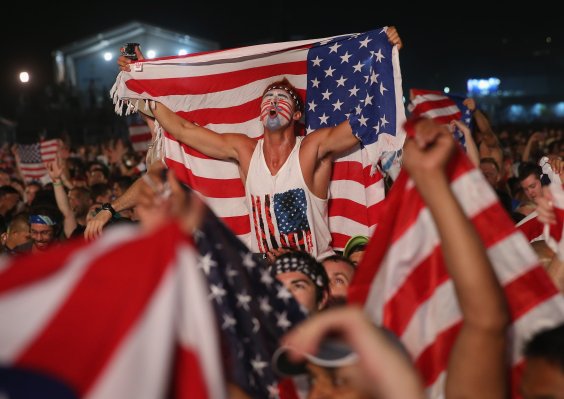 U.S. Fans Erupt After World Cup Win Over Ghana
Next Up: Editor's Pick