Paris: What to See and What To Skip

Tourists have long cherished Paris’s spectacularly preserved traditions and history, from its Napoleonic architecture and wrought iron bridges over the Seine River, to the dozens of artisanal chocolatiers and cheese-makers who can describe their products with passion and precision.

All that is still there and it wows millions of visitors every year. But now a new generation of Parisians, whose cultural references come as much from Manhattan as Molière, is ripping up the city’s old-world conservatism and experimenting with entirely new ways of eating and living. And for those of us who live in Paris, it’s a hugely welcome change.

For those who have already visited Paris, now is a good time to return. This time, consider skipping the Louvre and hitting the streets. One counter-intuitive rule of thumb about what’s new in the city is to choose places that use English to advertise their hipness; for many Parisians, it’s a not-so subtle dig at their old-fashioned French-centric upbringing. Hence, ‘le popup’ and ‘le speakeasy’ signal new, interesting places to shop and eat. Both have proliferated recently on the trendier Right Bank side of the Seine. (That’s right, the right bank is the hip side now.)

The new speakeasy Blind Pig, which is set to open on June 24 in the Marais neighborhood, promises in its announcement that it will offer “charme brooklynien,” no translation needed. There will be no maestro in residence in the kitchen, but rather a revolving cast of fast-food chefs who have taken French cuisine’s attention to detail and freshness and tweaked it to reflect a far more casual, experimental era. “Just as Paris has influenced other major world cities with its bistros, so the Anglo-Saxon world has truly inspired Paris,” says Alexandre Cammas, founder and president of the French online magazine and guide Le Fooding, which now holds events in New York too.

Cammas says Paris eating has drastically transformed since a decade ago, when it was “frozen” in place, with hundreds of cookie-cutter bistros and brasseries offering dishes that have not evolved in decades. Tourists still pack the better known among those establishments every night, perhaps for lack of knowing where else to go, or because their sentimental literary history lures the romantics back time and again. Cammas’ advice (in saltier language) is, save your money for new eateries where you will meet locals, not other tourists. In addition, the service is likely to be far friendlier than the tourist haunts, which tend to feature surly responses from waiters who know they will likely never see you again.

Far different from the myth, Parisians do in fact walk the streets in sneakers, and eat while doing so too. “Paris has places for chic, gentrified, fast food that proves that street food can be really delicious,” Cammas says Since wandering the old alleyways and majestic avenues in any case the richest visual experience Paris can offer, you can now combine that with sampling excellent French food on the go.

On weekdays, try Chez Aline, which is situated in a former horse butcher and now prepares gourmet lunch boxes, or gourmet kebabs from Grillé, near the Paris Opéra. For those who cannot snag a reservation at the high-end restaurant Frenchie, run by chef Grégory Marchand (formerly at the Gramercy Tavern in New York), it now has a takeout section nearby called Frenchie To Go (in English, bien sur). And for indoor dining, Cammas recommends the neo-bistros Chateaubriand and Septime.

But perhaps the best way of all to sample traditional and new French cuisine is in city’s many superb open-air markets. The all-organic Sunday market on the Left Bank’s Boulevard Raspail attracts hundreds of tourists as well as chefs and foodie Parisians. There you can sample individual shucked oysters, wines, saucisson, bite-sized tartelettes, fresh-from-the-farm produce, or dishes prepared in the market, including soups and paella. Then fill your bag and head to the nearby Luxembourg Gardens or the river to picnic.

To work off all this eating, hop on a Vélib bicycle. Paris’s share-bike system began in 2007 as one of the world’s first, and there are now about 20,000 bicycles at stations across the city, including on the riverbank itself—a not-to-be-missed new Paris destination. Since the Vélibs are part of Paris’s public transportation system it costs roughly the same as a metro ride.

One year ago, Paris closed its Left Bank river-level road to traffic, and now “les berges,” as the 2.3-kilometer (1.43 miles) path is known, is one of the city’s most dynamic spots, no matter the weather. You can cycle, run, rollerblade, picnic, play chess, watch skate-dancing, and from midday to midnight you can also sink into one of the orange deck chairs at the new Flow restaurant with a bottle of rosé, and watch the passing spectacle. You can even learn how to garden, draw graffiti on the chalkboard wall, take kickboxing or swing-dancing lessons, and for kids there are fencing and boxing lessons, wall-climbing and labyrinths. Check the daily program online.

A woman enjoys the sunny weather near the Louvre Museum pyramid in Paris on May 16, 2014.
Patrick Kovarik—AFP/Getty Images

Finally, if you cannot imagine a trip to Paris without visiting its great museums, you can now begin at the Louvre Museum at the eastern limit of Les Berges, and then walk, run, cycle or skate along the water westwards, emerging at the Quai Branly Museum, with its extraordinary collection of emerging-world artifacts and art. 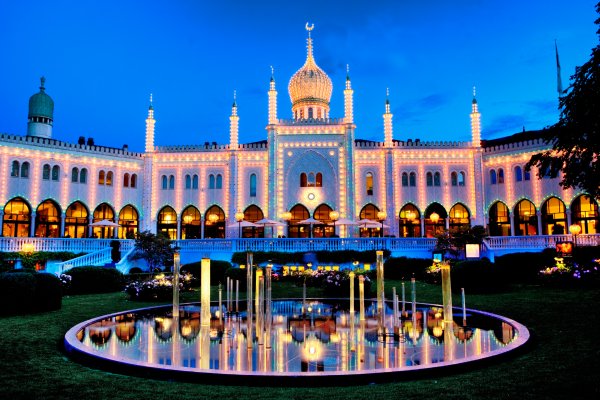 Copenhagen: See This, Skip That
Next Up: Editor's Pick