These Aren't Refugee Camps, They're Concentration Camps, and People Are Dying in Them

Rosheda Bagoung holds her malnourished child inside the tent at the Dar Paing refugee camp in Sittwe, Burma, on May 10, 2014
Lam Yik Fei—Getty Images
By Jason Motlagh

Several days before he was born, Mohammad Johar’s family escaped the Buddhist mobs that attacked their Muslim neighborhood, leaving bodies and burned homes in their wake. The threat of renewed violence has since kept the family and tens of thousands of fellow ethnic Rohingya confined to a wasteland of camps, ringed by armed guards, outside this coastal town in western Burma. But enforced confinement has spawned more insidious dangers. Last week, 2-year-old Mohammad Johar died of diarrhea and other complications, contracted in a camp that state authorities claim was made to safeguard him. The local medical clinic was empty and the nearest hospital too far — perhaps impossible to reach, given that his family would have to secure permission to go outside the wire. “Only in death will he be free,” sighed his 18-year-old brother, Nabih, moments after wrapping the toddler’s body in a cotton shroud.

Two years after the outbreak of communal violence, a deepening humanitarian crisis is claiming more lives by the day. Malnutrition and waterborne illnesses in the camps, aggravated by the eviction of aid groups and onset of monsoon rains, have led to a surge of deaths that are easily preventable. In a country that’s still being hailed in the West for its tilt toward democracy, the ongoing blockade on critical aid to more than 100,000 displaced Rohingya around Sittwe — and thousands elsewhere in Rakhine state — amounts to a crime against humanity, rights groups say.

For years, the Rohingya have been denied citizenship in Buddhist-majority Burma, and have faced severe restrictions on marriage, employment, health care and education. Now, it seems, the Burmese authorities are determined to starve and sicken the Rohingya out of existence.

“Aid is still being obstructed by the authorities in a variety of ways, and this appears to be symptomatic of the shared feeling among government officials at all levels that the Rohingya don’t belong in Rakhine state,” says Matthew Smith, executive director of Fortify Rights, a Bangkok-based group that released a February report highlighting long-standing government policies targeting the ethnic minority. “The increasingly permanent segregation of the Rohingya is wholly inconsistent with the dominant narrative that democracy is sweeping the nation. The Rohingya are facing something greater than persecution — they’re facing existential threats.”

The vice grip shows no signs of loosening. Construction is now under way for a sprawling, walled-off police base inside the camp’s perimeter. Doctors Without Borders, the international aid agency that was evicted by the government in February, has not been allowed back. Although some foreign aid groups have resumed operations since late March, when radical Buddhists ransacked more than a dozen offices, the U.N. says much more should be done. The World Food Programme continues to provide rations of rice, chickpeas, oil and salt, but aid workers insist they are not enough to stem the gathering problem of acute malnutrition. Indeed, several interned Rohingya tell TIME they were brutally beaten by Burmese security forces in recent weeks for attempting to supplement their diet by fishing beyond the boundaries of the camps.

Burma’s government refuses to recognize its 1.3 million Rohingya as citizens. Though Rohingya have lived in the Buddhist-majority country for generations, they are widely, and affectedly, referred to as Bengalis, to convey the false impression that they are intruders from neighboring Bangladesh. “There is no such thing as ‘Rohingya,'” insists U Pynya Sa Mi, the head of a monastery in Sittwe. “The Rakhine people are simply defending their land against immigrants who are creating problems.”

Burmese officials downplay the health crisis, noting provisions of water and medical services. But the misery in the camps tells another story. Just off the road that leads inside, naked children with extended bellies loiter near a makeshift clinic that serves hundreds of families living in tarp-and-sheet-metal barracks. A line of mothers awaits the attention of Chit San Win, a former nurse who, out of necessity, has become a mobile doctor to the displaced. He sees an average of 40 patients a day and says conditions have become “much worse” since Doctors Without Borders was ousted, citing the dearth of government services and supplies. A 1-year-old boy under his care coughs with symptoms of tuberculosis, a growing scourge due to a lack of vaccinations. HIV and malaria are also a concern. However, without a lab to run tests or international aid agencies to provide hospital referrals, he’s left giving out hopeful assurances and second-rate medicine. “I do what I can,” says Chit San Win.

While the death toll is not clear because of the restrictions against aid groups, desperate conditions have driven scores of Rohingya to risk their lives at sea on boats bound for Thailand and Malaysia. Originally, traffickers packed dozens of refugees onto rickety craft that often sank. These days, the smaller boats ferry travelers to larger vessels that come up from the Burma-Thailand border; once full, with 300 to 500 passengers, they set off on the three-day voyage to Thailand. On arrival, the Rohingya must pay $2,000 to traffickers who brought them. If they fail to pay up, they may be imprisoned in jungle camps for ransom or sold into debt bondage. Those caught by the authorities hardly fare better: the Thais corral them in grim detention centers, where they fester as officials wait for a third country to take them.

Abul Bassier, a 36-year-old schoolteacher whose brother and father were killed when a mob razed their home in Sittwe’s Bu May quarter, says his younger brother took his chances on a boat trip in March. About two weeks later, Abul Bassier received a phone call from a man in Thailand demanding money for his brother’s release. With six children of his own to look after and no freedom to work, he is overcome by his own helplessness. “What can I do here, a prisoner with no rights, no humanity?” he exclaims, breaking into tears. Each time Abul Bassier calls the number stored on his cell phone, he says a Thai man asks whether he has the money, then hangs up when the invariably negative answer is given.

And yet, with scant relief on the horizon, some Rohingya are still mustering everything they can to get out, selling their own food rations, scrap metal, even their own clothing to raise funds. One of them, Muhibullah, 54, says he made the journey overland to Malaysia in 1988, back when the ruling military junta had all but sealed off Burma from the world. He was caught and spent 18 months in prison in Malaysia before being deported home. Over the past year, he says five of his friends have made the boat trip successfully; three have died en route. “But I’m not afraid,” he says, getting nods of support from a group of hard-bitten men seated with him under the shade of a banyan tree, waiting.

An hour later, the funeral procession for Mohammad Johar glides by and the men’s conversation falls silent. Trailed by a gaggle of boys in knitted white caps, a volunteer carries the tiny blanketed corpse on a banana leaf, far past the sun-beaten barracks and empty government-built health clinic. The group finally stops at a grass clearing in earshot of the sea, where lines of bamboo pens mark the freshly dug graves. In short order the little boy is buried and a prayer offered. Another day, another life gone.

This story was reported with a grant from the Pulitzer Center on Crisis Reporting. 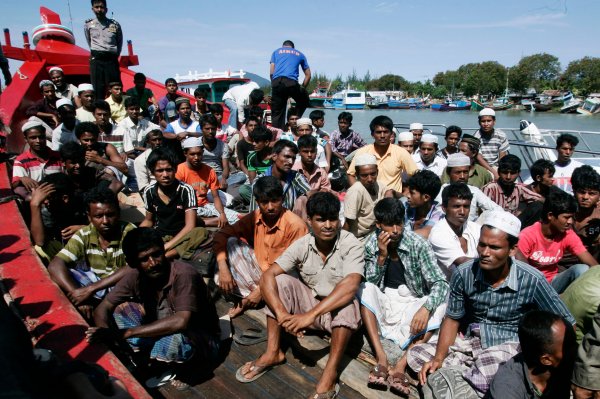 U.N.: 86,000 Rohingya Have Fled Burmese Pogroms by Boat
Next Up: Editor's Pick